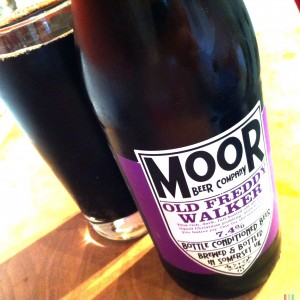 Only my second beer by this brewery and it’s my second flat one.
And that really bugs me as I’ve read so many reviews about Moor’s beers, all of which tell me how great they are, and none of them seem to mention the beer being flat.
Perhaps I’m just unlucky?
I mean, this beer tastes fantastic and smells super, but there’s not a single bubble in it.
OK, now I’ve got my moan out of the way Old Freddy Walker smell sof prunes and chocolate and yeast and leaf mulch.
It pours impenetrably dark with absolutely no head.
Taking a mouthful is simply joyous, rich and oily and mouth coating.
Freddy’s full of Christmas pudding fruit and nut richness, doused in brandy and set alight, it’s a big fat cuddly late night joy of a beer.
Brown autumnal Leafy hops go all sunset red and warm and comforting before the beer finishes dry and crunchy.
I just can’t believe it’s meant to be as flat as dishwater.