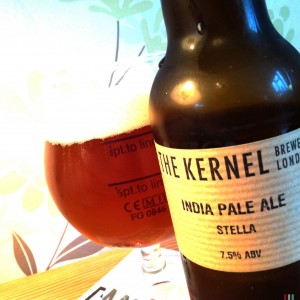 I have four single hop IPA’s from The Kernel to try so I picked one at random to start on and it was this.
I must say I was surprised at how thick and cloudy this poured having rested it for three days from its arrival.
In my glass it’s a big round ball of opaque brown orange stuff and it doesn’t look overly appetising.
That said, the smell is divine, rich and ripe and full of oranges with cloves stuck in them.
Stella feels thick on your tongue and has a nice slippery oiliness that makes it slide around as you swallow.
There’s enormous bitter fruit flavours like chewing your way our of a grapefruit only to find it’s been wrapped in lemongrass and bay leaves and then locked in a cell with some over-friendly peppercorns.
They give a fiery bite and are a lovely punctuation to the onslaught of plump fruity bitterness, but they’re eventually overpowered by a super dry, extra sexy finish that kisses you full on the mouth and bites your lip as it leaves.