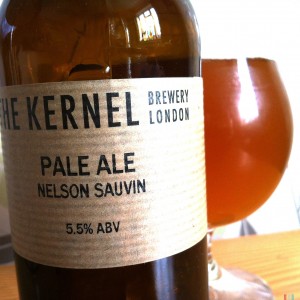 As with Nugget, reviewed a short while ago, this is a Pale Ale like most brewers would make an India Pale Ale, in that it has a huge hop presence.
But let’s start at the beginning.
Nelson Sauvin poured a big flat for a Kernel beer though it had a lovely marmalade hue.
The aroma is quite subtle  with gentle fruits and just a waft of sweet shop naughtiness.
On taking a gulp this beer feels a little flat too, but it held on to just enough bubbly action to keep me interested.
The initial flavour is a hit of hoppy grapefruit which drifts off leaving a nice sweet caramel malt with a soft biscuit underpinning it.
Never fear though, the hops come back.
A lot.
They snap into life in the finish with a whole basket full of citrus fruits giving you fleshy pulp, rind, pith and zest, along with some mango juice and a sprinkling of pepper which leaves a dry and slightly resinous end to what’s a very nice and rather subtle beer from The Kernel.