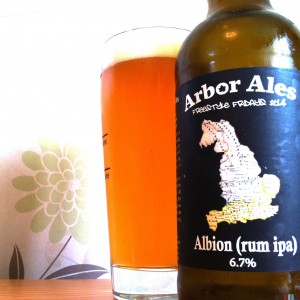 What a peculiar pint this is.
You all know how highly I rate Arbor and their beers and this is no exception except that I find it a bit, well, weird.
It’s a rum laced IPA and it pours a lovely, if a little cloudy gold with a foamy head.
The aroma is where you get your first hit of weird.
It smells hoppy, sweet and floral with a slight metallic apple core and something else, something I can’t quite put my finger on.
The flavours here are BIG, there’s no doubt about that, beginning with a runny honey rich caramel malt.
Burned sugar bittersweetness and a decent peppered toffee tang.
The hops, as with just about everything from Arbor beers, are big and shouty.
Tinder dry and super crisp, you get English country lane hedgerow greenery with cowslip pithiness and nettle stings which leave you with a face like a drawstring bag puckering at the goodness of the super long finish.
But there’s still something odd.
I don’t really taste the rum at all, but something a bit weird.
And you know something?
It’s a flavour that reminds me for all the world of lager and lime.
Yes, lager and lime.
This is a very good beer indeed.
It’s just a bit strange.