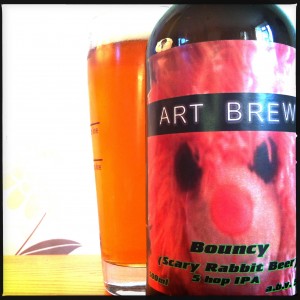 This has been a bit tricky to get hold of.
I’ve wanted to try something by Art Brew ever since I had their collaboration with Arbor Ales a few months ago.
In the end I managed to find a bottle of this “5 Hop IPA”.
It’s one of only 72 bottles.
Count ’em.
You see, there’s something about Art Brew that really grabbed me.
It’s something about their attitude that reminds me of the anarchic Dadaist bands that I love like The Red Crayola, Cravats, Noseflutes.
Bands that use weirdly dark comedy to political ends.
I’m not saying Art Brew are trying to be political but they have the same odd playfulness.
I may be completely wrong of course, but that’s how I feel about them from what I’ve read and my chats with them.
But is the beer any good?
In a word YES.
This is one hell of an IPA.
It pours a lovely shiny orange with a nice fluffy, cuddly toy of a head, and an aroma that absolutely stinks of good things.
The smell is full of tropical fruit juice, grapes and chewy sweets.
But as much as anything it’s the super freshness of the smell that’s absolutely mental.
It doesn’t really smell like beer, but rather like pushing your face into all the ingredients of a good beer while they’re still being harvested.
That fresh.
It’s peculiar and peculiar is good.
And then in your mouth the beer’s a madman (or a scary rabbit as they describe it, due to the amount this beer “hops”), with a killer thick toffee that you have to wade through and a side order of wafer biscuits dipped in honey.
But what this beer’s about is the hopping.
A mix of five American and New World hops bring immense washes of melon flesh, mango pulp, lemons and limes.
The hops begin big, round and fat, like over ripe fruit ready to burst and then they turn nice and acidic, full of citrus peel and zest with enormous blasts of pithy rice paper textured dryness.
And the finish here just goes on and on and on.
So to sum up, this is a brilliant IPA with a brilliant name.
To misquote Mayo Thompson, God Bless The Art Brew And All Who Sail In Her.