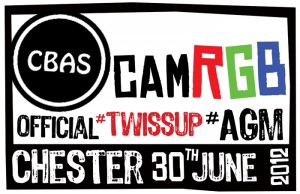 Yesterday I travelled up to Chester to take part in a day of beer fuelled fun.
Organised by Andy (@TheRealC_BAS) of The Chester Beer Appreciation Society (CBAS), we were promised pubs and beer and food and fun.
I caught a train from Leicester just before midday and  after changing for Crewe I opened a bottle of Sierra Nevada Torpedo to go with the cheese sandwiches that I’d had the forethought to make that morning.
I got talking to the couple next to me and it turned out that we were all in bands and have various mutual friends.
It’s a small world in the indie scene.
Finishing my beer I left them at Crewe and headed on to Chester, arriving just after two o’clock and just before Paolo (@PaoloFernley) who was travelling up from Shrewsbury.
He, Andy CBAS and James (@jamesbwxm) from the Sandstone brewery all arrived at the same time and we headed over to our first port of call. 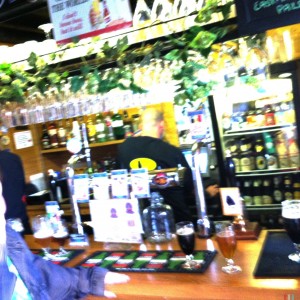 Kash is a brilliant little venue.
Just around the corner from Chester station it’s home to the Blueball Brewery and was the place everyone was to meet up and spend the opening couple of hours.
There were five Blueball beers on and being in their home it seemed only fair that I should work my way through them.
I’d decided earlier that I’d only be drinking halves in an effort to try more whilst remaining less drunk.
It was a good idea.
I opted for Blueball’s Blonde Bombshell, an American Pale Ale and a superbly crisp beer, and just as I was finishing it a whole bunch of people turned up.
Mister JK of Quantum Brewery (@misterjk), along with Mark Landells (@landells) who had travelled up from the west country, and Chris Saddlers (@ckdsaddlers) and Shaun (@19irishdragon) who made their way up from Birmingham were first through the door and were shortly followed by a whole bunch of people that I would spend the rest of the day getting to know.
We all sat down and started chatting and, shortly after a large group shout of “Cheeeeeeeerrrrssss!“, the wonderful people of Kash produced free food for the Twitterati.
Yes, free food. 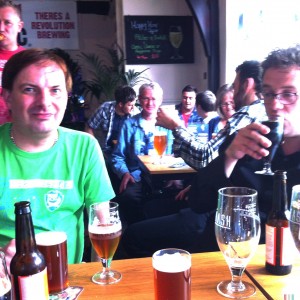 Paolo & Mark talk beer while Andy CBAS peers in around the corner.

Corn dogs were munched and meat pies were scoffed and I worked my way across the bar.
Blueball’s Indie Girl was a nice sharp IPA (but then I’ve always loved an Indie Girl), Ruby O’Reilly was a red ale that, although good wasn’t to my personal taste, I made a short detour on the bar to try James’ Obsidian which was a lovely dark and smokey beer, before tasting what was the beer of the day for me and one that I would return to at the end of the night.
Blueball’s White Betty is an 8% Belgian style golden ale and fresh and sparkling from the pump it was simply sensational. Big and fruity, hoppy and dry, it really blew me away.

At around 5 o’clock we left Kash and took a lovely scenic walk through Chester to The Pied Bull where a specially brewed #TWISSUP Black IPA awaited us. 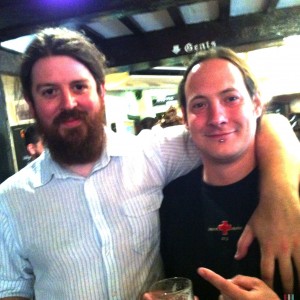 Mister JK and James like each other very much. Especially after a pint or two.

The Pied Bull is a lovely traditional looking pub in the heart of Chester with a brilliantly forward thinking management team and a micro brewery in the cellar.
There was a tour for all those who wanted to have a look around the brewery and then out of kitchens came MORE FREE FOOD!
This time it was mountains of scampi and chips piled high on plates and scattered around our tables.
During our time here I had a good natter with Mister JK and James,  and had a brilliant and amazingly motivational chat with the Blueball head brewer in which he drummed into me just how important CAMRGB can be if we all work at pushing it forward.
He planted the seeds for lots of beer related adventures in my brain, I filled up on scampi and then we all set off back across town to visit Artichoke. 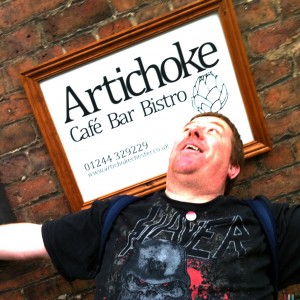 Chris is quite pleased to be at Artichoke.

Artichoke is a modern gastro pub that sits right on the canal and offers some great beers including Dupont Saison on draft which I simply couldn’t refuse.
By this point a couple of things had happened.
My iPhone had decided to run out of juice hence the lack of tweeting activity, and one of our party had lost the use of the English language.
He wisely bade us farewell and set off for home.
At least I think that’s what he said.
And then Mark, being the head of the Paramilitary wing of CAMRGB, came to my technical aid with a small device for adding power to my phone.
I talked a little with Steve (@pasteyh2g2) who had not only gifted me a bottle of Hardknott English Experiment and a bottle of his home brew but also insisted on buying me a bottle of Delirium Tremens.
This makes him really rather wonderful.
He was also splendidly attired in linen suit and panama hat. 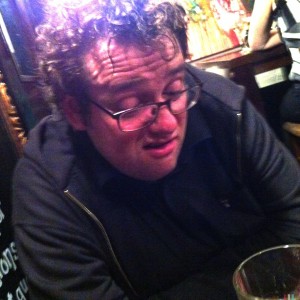 As the sun set we wandered the few yards down the road to The Cellar which I won’t dwell on too long as it was a little too noisy for me and so I just hunkered down in a corner with The Boy Landells for a quiet natter.
I had a beer there but I’m not sure what it was.

To finish the night on a high everyone wandered back to where we’d begun our adventure.
Kash was full of happy people drinking excellent beer and I just couldn’t resist having one last glass of White Betty.
We laughed and joked and gave each other manly handshakes and not so manly hugs before heading back to Andy CBAS’s house to collapse in a big drunken heap.
This morning I was treated to tea and breakfast and conversation before heading for the train with Mark Landells alongside me. 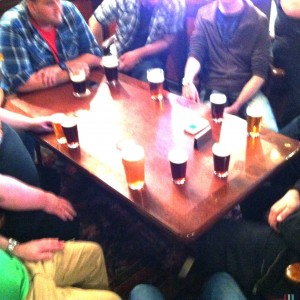 If you can get to Chester and visit some of its many wonderful pubs I urge you to do so.
It’s a town that has heard the clarion call of Really Good Beer and, lead by Andy and the Chester Beer Appreciation Society is putting itself firmly on the UK’s Good Beer Map.
I had a wonderful time with some excellent people, drank some super beer and made some firm friends.

Thanks to the wonderful people at Kash, The Pied Bull, Artichoke and The Vaults for being so warm and welcoming and looking after us so well.
A particular thank you to Andy for organising all this!

3 Responses to Beer Is The Winner: The Chester Beer Appreciation Society CAMRGB TWISSUP