I don’t know about you but I’ve really fallen for Black Isle’s beers.
So much so that I decided that I needed to have a chat with Colin their Head Brewer and Production Manager about who and what and why.
Colin joined the Black Isle team in 2011 having served nine years at Marble Brewing in Manchester and a couple of years with the Liverpool Brewing Company.
Black Isle Brewery began life in an old cattle shed in the Scottish Highlands, just across the water from Inverness, in 1998 and was founded by David Gladwin, who has since been joined by brother Michael as second Director.
I asked Colin a little of his past to which he replied, 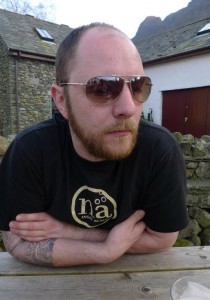 “I have had a few careers along the way. I moved to England in 1998 to study Architecture at Liverpool John Moore’s but didn’t enjoy the course and left.
I took on a job at The Brewery pub and when the brewer of the attached brewery quit I was asked to take the job on. I knew nothing about brewing and mostly drank shit lager but was keen to find a career and to learn a new skill.
I worked hard there (if the beer wasn’t fantastic) but the company decided to sell up and I moved to Manchester.
Whilst I started another university course, (Journalism and Sociology) I took some work on at the Marble Arch pub to earn some pennies.
While there I talked to the brewers and they keenly offered me some time helping out around the brewery and then found they couldn’t get rid of me. When I finished my degree I got a call saying that the second brewer had given his notice in and did I want the job. I did and the rest is history.”

On the brewery’s capacity I was told that, 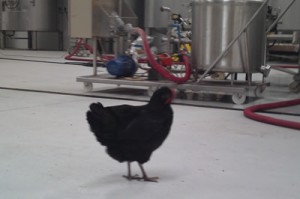 “We are based on 150 acres of farmland seven miles outside Inverness.
The brewery upgraded from a 5 BBL kit that was brewing around eleven times a week to a 30 BBL kit just under two years ago. We are still expanding and have three new conditioning tanks and a new unitank arriving in August 2012.”

I was interested in why the brewery filters its bottled beers and, like so many others I have spoken to, it’s a matter of logistics and shelf life, though it was made clear that,

“[…] we don’t let this compromise the flavours so we make extensive use of dry hopping and other techniques that allow us to maximise flavour.”

Finally I asked about plans for the future and was told that Black Isle intend to, 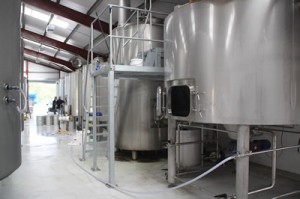 “Make as much amazing beer as possible and to explore the use of more ingredients outside the hops-and-malt backbone of our beers.
The organic tag is great and we believe it is the best for you that beer can be, but it can limit the palate of malt and hops available.
Lets see what else we can use to maximise flavours.”

I also got hold of a bunch of Black Isle beers that I’d not tried before.
This is what I thought of them.
(I have also included previous reviews here so as to give a single hit to anyone interested. So a couple of these you may have read before). 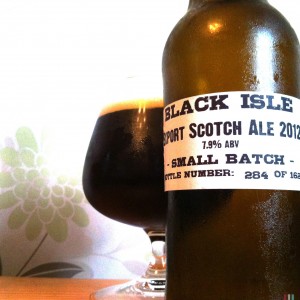 Export Scotch Ale Small Batch 2012 (7.9%)
Export Scotch Ale is one of Black Isle’s limited edition small batch brews and it’s very good indeed.
It pours the most wonderful red black and holds a delicate ring of bubbles right down the glass.
The smell is spicy and fruity and steeped in a very nice leafy juice.
As you take a mouthful you are immediately struck by a hefty kick of ruby red stewed fruit, very reminiscent of that barley wine sweetness.
In fact there are flavours here that are more often associated with beers of a far higher ABV.
This is a warm, thick and rather sexy little beer with dark treacle thick malts that coat your tongue only to be pricked by the superb leafy hops.
Maple syrup and pine resin, a good twist of lemon juice, crunchy brown leaf litter and a soft dry and sweet peppered finish that lingers like a warm memory.
Delightful. 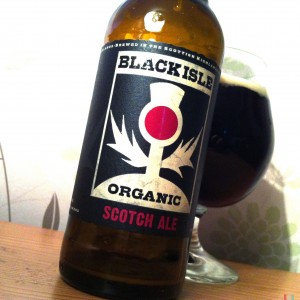 Scotch Ale (6.2%)
This is one of those beers that you wish came in a bigger bottle.
330ml just isn’t enough.
Black Isle’s Scotch Ale is a deep and sensuous mahogany red and fills your nose with bracken and pine bark and crisp leaf litter.
So far this seems to be a bit of a theme with Black Isle’s beers, but that’s in no way a complaint.
This brewery has a signature flavour that I’ve mentioned before.
It’s the taste of walking through the highlands.
Bracken and heather, pine and woodland, all washed clean in pure rain water.
The malt here is honey heavy, shortcake biscuits and just the vaguest whisky heat, while the hops jump out at you all vivid reds and greens.
Red wood, red berries, red autumnal leaves and green pithy grass, fresh green herbs and green bracken.
Delightful, wonderful, superb. 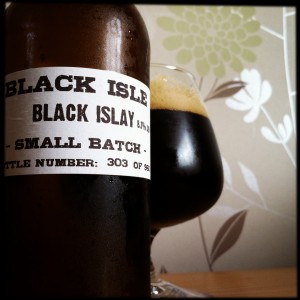 Black Islay (8.1%)
Another beer from the Small Batch series and this is a beauty.
It’s a stout that pours tar thick and black and smells of liquorice, oak and whisky.
From the first mouthful you realise that this is a big stout, a full bodied stout, a rich and thick stout.
Black Islay is packed with cacao beans, dark bitter chocolate melted over chilli flaked treacle toffee and punctuated by hard anise gobstoppers.
There’s liquorice shoelaces in here, chewy and bittersweet, and a huge bath full of coffee to sip after enjoying plums stewed in whisky.
The finish is defined by blackberry leaves and spiky horseradish with a stinging nettle dryness that last for ages.
Just lovely. 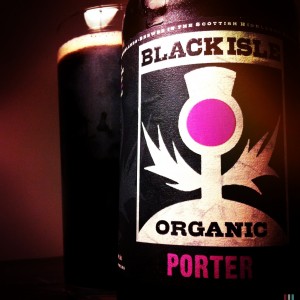 Porter (4.6%)
Black Isle seem to be very quietly unleashing wonderful beer into the world while most of us are looking the other way, and that seems a great shame.
This is a very well made porter, nothing challenging, it just does what it’s meant to do incredibly well.
The beer pours a red tinged blackness with just the rumour of a head, and smells of chocolate coated raisins that continues into your fist mouthful.
As you take a drink you’re given a soft velvety chocolate full of raisins and just a dash of rum, all presented on a lovely lightly baked shortcake biscuit.
There’s a slight pepperiness too, but everything is soft focussed, subtle, gentle even, and very very nice to drink.
The feel of this beer is a casual wash of flavours along with a light breeze waft of aromas.
The hopping too is so delicate that what you get is almost a whispered hint, a softly spoken description of bitter dryness.
Black Isle’s Porter is brewing loveliness. 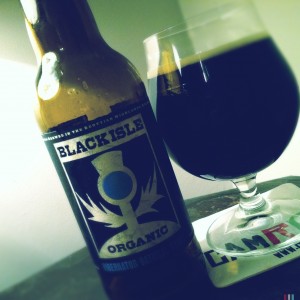 Hibernator Oatmeal Stout (7%)
Wrapped in a beautifully designed bottle label with spot varnish and everything (Graphic Design Geek Warning), I’d read and heard a lot about this brewery and all of it good.
This is my first beer from them and if this is anything to go by, all the hype is true.
This is the most lovely, soft and delicate stout.
Despite the reasonably high ABV, all the flavours are subtle and refined and absolutely delightful.
The beer pours fathoms deep and smells of warm red fruits and sherry trifle.
The flavours begin with a comforting shot of warm bedtime Horlicks, creamy and filling and satisfying.
There’s also a soft fruit pie juiciness smothered in thick custard (from the oatmeal I’m guessing) that fills your mouth before the bitter liquorice laces and sweet chocolate caramel give way to a super soft hop that leaves a dry, slightly Parma violet tinged finish.
Absolutely delightful. 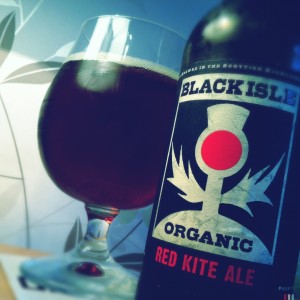 Red Kite Ale (4.2%)
What I have here is autumn in a bottle.
It’s a walk through countryside, wrapped up warm, smelling the air.
Pouring into my glass a fireside brandy red and glinting in the light I could just tell that was what coming was something a bit special.
Deep red malts and bone dry hops contrive to make you reach for your favourite jumper.
I’ve mentioned beers tasting like leaves or woodland before and I take them all back as none of them taste as much like leafy woodland as Red Kite does.
In fact this beer tastes remarkably like the place in which it’s brewed.
There’s windswept highland bracken, gorse sap dryness, pine tree resins and crisp autumnal leaf litter.
You also get a big dollop of heather honey, toasted oatcakes, clear clean water and the feintest wisp of whisky smoke. 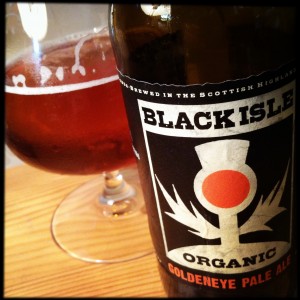 Goldeneye Pale Ale (5.6%)
Goldeneye pours a beautiful glowing orange marmalade and smells fresh and crisp, its aroma full of meadow flowers and honey.
The malting here is heavy with toffee, sweet and rich, but cut through with a dry biscuit base and a lush honey centre.
This is Black Isle’s lightest beer (at least the lightest I’ve found in their range) and it’s still bursting with energy and life.
On the verge of the hops coming to the fore there’s a lovely space dust and candyfloss sparkle that pops away at your tongue, but just for a moment before everything goes green.
Woody resins, snappy orange rind, cracked pepper and bay leaf parched lemon juice make up the finish and leave you with a clean, crisp and dry ending to a lovely bright and lively beer. 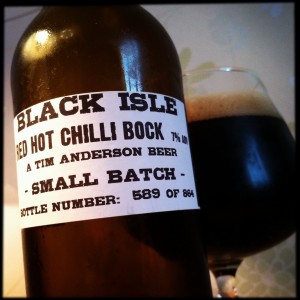 Red Hot Chilli Bock (7%)
Pouring like a thick stout, this is one hell of a beer.
It’s an impenetrable mahogany with a ring of creamy bubbles for a head, and the aroma is packed with stewed forest fruits, paprika and booze.
And boozy is a good word here as this bock is one massive face melting beer.
There’s a treacle thick caramel, black and sticky, sweet and rich and fathoms deep.
But that said there’s nothing heavy on your tongue, making this beer feel for all the world like a sparkly black lager.
Which it kind of is.
The hops are knife sharp, cutting in with fresh sappy woods and a nice little hit of lemon juice.
And all the while the chilli heat builds.
It’s not as red hot as the name suggests (though I suppose that depends on how hot you like your chilli), but it’s warming and sexy and it’s making me stare like a fool at my glass with an enormous smile on my face.

Thanks to Colin Stronge for taking the time to talk to me about himself and the brewery.

3 Responses to Black Isle Brewery: Beer From The Highlands