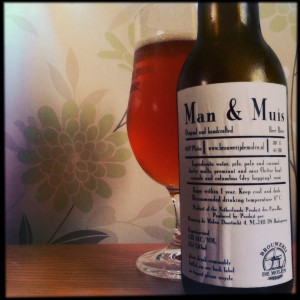 This is a remarkably light beer for this brewer.
Light in every way.
It has a slightly Saisonesque, apple skinned yeast aroma and sits in the glass a dull orange with barely any head.
De Molen, as you’ll be all too aware by now, are my favourite brewery, but I have to say that with Man & Muis they seem to have finally brewed a beer that I’m not fussed about.
There’s just very little here, like a big watery feeling right in the middle of this beer.
Around it swim very soft malts that hint at caramel gloopiness but don’t deliver.
And considering the mix of hops, Premiant and Saaz, Cascade and Columbus, there’s only a dim bitterness, a short sharp hit of leafy lemons, and a gentle dryness.
I’m not sure what De Molen were aiming for with Man & Muis but it seems to lack a lot of things, mainly focus.
Like your favourite band making one record you don’t like, this is the one I’ll not turn to again.