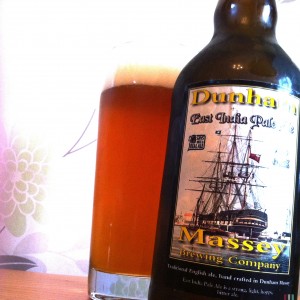 I don’t half love a well constructed IPA and this one’s been really well put together in the flavour department, though I had a couple of concerns overall.
Firstly it poured with a head so enormous that I need two glasses to tame it, though it finally settled down to a nice comfy cloud.
And in the aroma, mixed up with some very nice fruity and yeasty smells, was a hit of farmyard and cabbage water.
But once I got into the drink itself it was an altogether different beast.
The malts are dark gooey toffee with a splash of rum, a light wafer biscuit and some orchard fruit juice sweetness.
Everything rumbles around your mouth knocking your gums with this flavour and that, with a hit of caramel and a punch of alcohol, fruitiness and a good pinch of pepper too.
And then then hopping brings crisp yellow meadow flowers, mown lawns and that pithiness you get when you accidentally chew on a lemon pip.
All this makes for a big fresh and bold IPA with a satisfyingly long and dry finish.