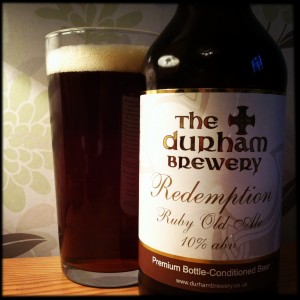 I little while ago I was lucky enough to get hold of three bottles of the 2012 batch (brewed at the end of 2011) of this Ruby Old Ale, one of Durham’s yearly specials more or less as soon as it was bottled.
I decided to review one bottle fresh from the brewery, one after three months and one in September/October when the beer goes on general release.
So what’s happened after three extra months in the bottle?
A little bit of magic.
Redemption now pours a glowing plum juice red with a nice fluffy head.
The aroma is intense toffee and ice cream cones, raisins, Weetabix and whisky.
Ad there’s whisky in the flavour too.
Single malt, peaty, slightly smoky whisky.
The malts have become great big toffee cannons blasting rich gloopy warm and sticky globs of honey wrapped digestive biscuits that crumble under the weight of sexy plummy brandy booze.
The hops are dry and leafy ad autumnal, resinous like a pine wood stroll, with leaf mulch dampness before some scorching lemon juice highlighted dryness slaps you into submission.
Redemption really does get better with age.
Roll on September.