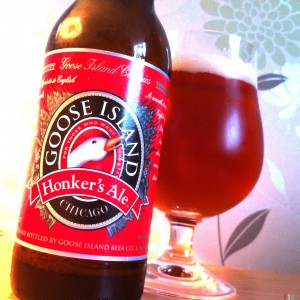 I’ll keep this very short and sweet.
Though I generally like Goose Island beers I find this one totally forgettable.
In fact while drinking it and entering it on Untappd it became apparent that I have definitely tried it before.
It’s a thin and bodiless take on an English bitter.
There’s some caramel and toffee with a slight burned sugar edge.
It smells of brown leaves and maple syrup and there’s a tinge of leafy hops.
But I’m struggling to find much else to say about it.
It’s certainly a country mile short of Goose Island’s Pale Ale and even further away from their Bourbon Stout.
As a take on a run-of-the-mill English bitter I guess it does what you’d expect it to.
Drinkable but unremarkable.