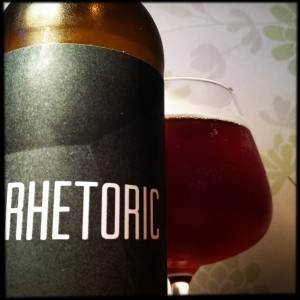 Billed as a Star Anise Infused Quasi Bombastic Belgian Quad, this is the first in Hardknott’s new Rhetoric series of experimental beers.
I was supposed to open it as part of the brewery’s #OpenTheRhetoric Twitter event last weekend but was otherwise engaged with the CAMRGB event in Chester, so I’m having to catch up now.
Rhetoric pours a deep dark amber but retains no head at all.
In fact I’m a little disappointed with the lack of fizz.
There’s enough but only just.
That though is a very small gripe indeed because Rhetoric tastes super and smells great.
An enormous nose full of fizzy cola bottles and brandy that continues into the flavour.
Rich warm alcohol heats your chest and melts the crunchy brandysnap sweetness, and then the cola bottle raise their heads and fizz on your tongue, feeling physical, chewy, visceral.
The star anise isn’t up front and in your face, it’s more a subtle background throb that gives a red richness and lends a soft liquorice to everything else that’s going on.
The hops are a brittle autumnal dry leaf crunch.
A hint of lemon and a glass of orange juice before a chilli speckled dry finish.
I’m looking forward to Rhetoric number two.