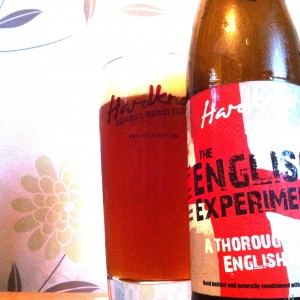 Billed as a Thoroughly British IPA, this beer was brewed as a collaboration between Dave at Hardknott and John Keeling from Fuller’s using a bunch of new British hop varieties.
I’m sure others have reviewed this already but to be honest I don’t read many beer reviews (yeah, I know) so what I’m about to say may have already been noted.
My first impression is, slightly weirdly, I can taste Bengal Lancer in here.
Maybe it’s psychosomatic but it’s almost as though just having the presence of John in the brewery has made this beer taste a certain way.
Though on second thoughts that’s exactly how it should be.
You can taste both brewers.
That doesn’t sound quite healthy but you know what I mean.
The English Experiment pours a feisty deep amber and retains its head right through the drink.
It smells of yeast and sour dough biscuits and underripe peaches and simply asks to be drunk.
And so you do.
(It’d be rude not to).
Up front you get a superbly sweet toffee malt with flecks of crunchy black peppercorns, a little digestive biscuit cereal crumb and a wash of runny honey.
The hops are very English indeed.
Elderflower pithiness, meadow flowers and the smell of walks up country lanes bordered by high damp hedgerow.
The finish here is snappy and bitter, like a Bengal Lancer turned up to eleven.
I love Hardknott and I love Fuller’s, two breweries making great beer at different volumes and for slightly different markets.
Together they’re colossal.

NB: Thanks very much to @pasteyh2g2 for giving me this beer to try.