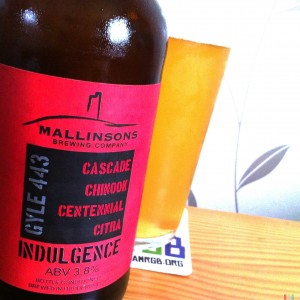 Are they having a laugh?
Brewing a pale ale at a gentle 3.8% and calling it Indulgence?
Surely a beer called Indulgence should be a million percent stout chock full of superlatives and beery clichés.
Well maybe, but whatever you want to call this beer it’s absolutely brilliant.
And it certainly doesn’t taste light in any way.
Brewed using four hops beginning with the letter C, Indulgence is a very light straw with barely a head but plenty of fizz.
It smells intensely citrus fuelled, coming over über grapefruity.
The malts are very soft, almost nonexistent, they just about hold up.
But only just.
Cascade, Chinook, Centennial and Citra make up the hops and Mallinsons appear to have used a hell of a lot of them, making this a searingly dry, crisp and bitter beer.
A beer all about stinging citrus freshness.
Lemon and lime skins, grapefruit flesh and zest, it’s light and snappy but intense and sharp.
Indulgence is lovely if somewhat of a misnomer.