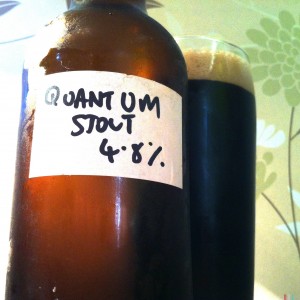 The last of my Quantum beers and it’s a decent one to finish on.
Quantum’s Stout pours deeply, darkly deep and dark and has a rather comfy cushion of bubbles for  a head.
It smells of chocolate and yeast and the second hand leather satchel that the sixteen year old me used to take to college when I was a John Peel listening indie kid.
This is a big chocolatey stout, thick and filling and full of prunes.
What’s a little incongruous is that there’s a real extra bitter, slightly sour yeast thing going on in the background.
I’m not even sure it should be there.
Perhaps it’s just this bottle.
It’s not a bad thing though, just unexpected.
After the chocolate pudding body there’s a leafy, woody bitter finish that wrinkles your tongue and lasts for ages.
All in all a terrific, if slightly odd stout.