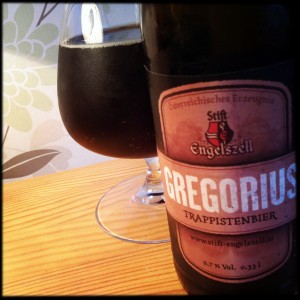 Austrian Trappist Beer anyone?
Yes?
Don’t blame you!
This is both super and duper.
From what I gather this particular beer is also not the easiest to get hold of outside of its home nation so I was particularly excited about opening it.
So what’s like.
Well, it’s a triple, quadruple, metatuple (?),
Whatever it is it’s an enormous mahogany coloured beer.
Like an antique bookcase drenched in booze, it smells of nothing less than old wood and pears and peaches stabbed by cloves before being drowned in brandy.
Taking a first sip fills your mouth with bran rich digestive biscuits, dry and crumbly, topped with prunes and plums stewed in spices and a pinch of dried chilli, and all held together by dark sticky treacle.
And then there’s the hops.
Gregorius drinks a little bit like a boozy version of Greek Dolma, the hops wrapping the rest of the ber in a handy leafy sheath, all woody and green, soft, dry and crisp.
There’s some lemon juice on the side as a dip and then all of a sudden, just as you think it’s all over, you’re poked in the eye with a big stick of liquorice.
I may not be correct but I gather that there aren’t too many bottles of this in the UK.
I suggest that if you see it buy it, it’s brilliant.