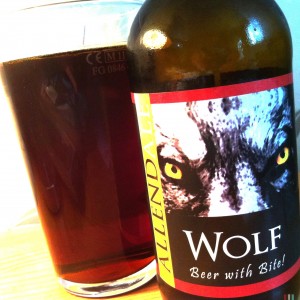 I didn’t know what to expect from this beer.
I’ve had a few from Allendale’s range and enjoyed every one and I suppose I had preconceptions about Wolf, thinking it’d be some big hoppy brute regardless of what it says on the bottle’s label.
After all it does call itself, “a beer with bite”.
Wolf pours a deep and sexy chestnut red and smells of chocolate coated hazelnuts and pecans.
Taking a sip you get a bloody enormous rich chocolate flecked with rum, raisins and sultanas.
There’s lovely crunchy and deliciously toasted biscuits and handfuls of snappy peppercorns.
Drinking more I have to say I’ve rarely tasted a more intensely chocolatey beer, especially when you consider this beer’s lightness.
This is not a stout.
It’s not a porter.
It’s a red ale in a bath of dark chocolate.
But never fear, the chocolate doesn’t make Wolf cloying in any way.
And that’s because there are hops in here too, and they’re zippy and smart and cut through everything with a freshness that brings crisp hedgerow leaves, some slightly underripe wild berries and a twist of citrus that cleans your mouth and leaves a lovely dry finish.
So you so Wolf wasn’t what I was expecting at all.
No, it’s much better than that.