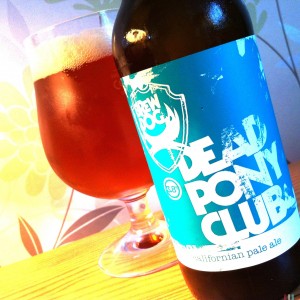 I was surprised to find this in my local Sainsburys yesterday.
On top of which it was sitting alongside some oversized bottles of Punk IPA (550ml?) and I just had to try it.
Dead Pony Club opens with an enormous blast of flowers and fruits before sitting in your glass in a glowing orange ball with just a ring of bubbles for a hat.
On taking a mouthful I felt a huge wave of déja vu and for a moment I wondered if this was a relabel of one of BrewDog’s Prototype series that I’d tried a few months ago.
On rereading that article I found that it’s not but it shares some very similar qualities to the 2.8% Blitz! that was part of the Prototype range.
What links these two beers together for me is a complete and distinct lack of substance.
There’s just no body at all.
You get one hell of a wave of hop fuelled white flower, citrus zest infused bitterness but there’s nothing to support it and so it simply falls apart.
You’re left with a gassy feeling where the malting should be and this makes the beer feel rather astringent without the ground support of a good dose of caramel gloop.
This beer needs help.
It needs something, anything to stop it being the harsh lemony little brother of the, nowadays at least, disappointing Punk IPA that it is.