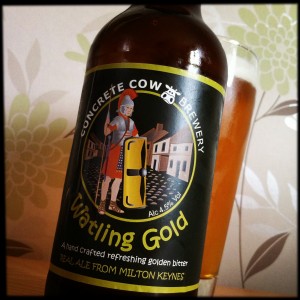 This is the second beer I’ve tried from this brewery and sadly it’s the second I’ve not liked.
I didn’t even bother writing about Cock’n’Bull as I couldn’t find anything of interest to say about it.
I’m not a big fan of writing bad reviews for the sake of it but I’m even less a fan of only publishing good reviews as I believe one should be honest in one’s writing.
I used to hate it in music writing.
You could easily tell when a fanzine writer was simply out for free stuff as their publication would be cover to cover glowing reviews of anything and everything.
And nobody likes anything and everything.
The main problem I have with Watling Gold is that it has almost no discernable flavour, so light is it in the glass.
There’s a feint apple juice aroma and it certainly looks nice with its creamy foam head.
But taking a mouthful you can actually taste the gas in the bubbles (and this is bottle conditioned) more than anything else.
It’s a very similar flavour to soda water.
The vaguest caramel is detectable followed by a slight bitter kick with the rumour of something lemony.
With the bottle of Cock’n’Bull I tried a few days ago I tasted nothing but digestive malt.
Maybe mixing the two beers together might give a more rounded flavour.
What we need to remember before people start shout heretic at me is that, 1. This is my opinion and, 2. Not everyone is good at everything, ie. not every new brewery will be a good brewery.
There will always be a book or a TV show you won’t like.
And there’ll always be a brewery whose beer you don’t like.
You may open a bottle of this beer and love it, find something in it that I couldn’t, but I’m sorry I just don’t like it.