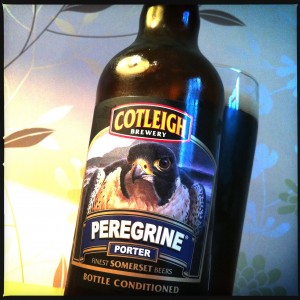 From the age of nine onwards I was a member of the Young Ornithologists’ Club which was the junior branch of the RSPB, and there was a Schools program on the telly (remember Schools programs? Remember when here was only an hour or so kids’ TV a day?) that featured a Peregrine Falcon and some kids stopping thieves stealing its eggs in a convoluted attempt to teach the English Language.
I fell in love with Peregrines.
I’m still in love with birds and though not an avid twitcher I can discern a few by their song and tell you what’s what in the finch world.
Cotleigh have named their Porter after one of my favourite birds (though nowadays the humble Kestrel holds number one position in my heart) and it’s worthy of its name as this is a lovely glass of beer.
The aroma is a malt rich blast of fruits and chocolate and te beer is a deep dense mahogany in the glass.
There’s a very nice creamy feeling as you take a mouthful, which raises that question again, where does Porter stop and Stout begin?
Roaming around in here there’s a very nice and rich dark chocolate and a great big bowlful of stewed plums and prunes.
The hops here are a subtle bushy hedgerow pithiness with a crunchy leaf finish that dries in a very satisfying way.
A very good beer indeed.