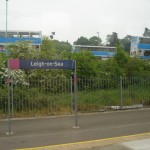 Having relocated to Leigh-On-Sea a couple of months ago it was time for the house warming pub crawl. In theory it’s less mess to tidy up! Leigh-On-Sea was once a thriving fishing port on the Thames estuary and is still famous throughout the world for it’s cockle sheds which gets the thumbs up from a cockney like me. It’s now a well visited tourist “town” meaning that the pubs I have visited so far seem to be geared towards the holiday trade rather than the local one.

Of course I had to pick the day the Olympic Games came to the area as the mountain biking competition was taking place at nearby Hadleigh Castle. Luckily everyone was going the other way and we made our first stop in The Sarah Moore which is a modern looking Martsons pub which had two hand pumps on. Predictably one was Pedigree so we all opted for the Strisselspalt (4%) which is the latest beer in their single hop series. Sadly the beer tasted like a bland, lifeless lager which not even the addition of a sparkler could revive. It was a disappointing start as I have enjoyed the beers in the Marston’s series to date and I have to put in down to the way the pub kept and served the beer rather than the beer itself.

Our next stop was The Elms which is one of two pubs in Leigh-On-Sea in the Good Beer Guide. It’s a typically large Wetherspoons serving the typecast customer base the chain seems to attract these days. There were a number of beers on, most being the common ones from the larger brewery chains but with most of the clientèle seemingly drinking Bulmers n’ Ice I opted for the Adnams Explorer (4.3%). Sadly it was almost as chilled as the Bulmers rendering it pretty tasteless. I am not sure why most Wetherspoons pubs chill their ales to oblivion but its one of the reasons why my £30’s worth of Wetherspoons vouchers CAMRA send me annually never get used.

Luckily it was a case of third time lucky with our next stop which was The Broker. This pub was a regular in the Good Beer Guide until recently and has six hand pumps on with beers spread between major and smaller breweries. I have found the beer to be hit and miss on my previous visits but today the beer was ship shape in the form of Mighty Oaks Summer Daze (4.5%) which was a golden ale packed full of hops with a fruity after tones. In fact it was so nice that we stayed for three pints as we enjoyed the Olympic Football final. Beer and footy. You cannot beat it as we cheered on underdogs Mexico as they saw off the highly fancied Brazilians 2-1. It had the most “local” feel of all the pubs we visited.

It was time for a food break so we headed into Old Leigh which was now filling up with visitors and Olympic games stewards all enjoying the early summers evening. As food was calling our next stop was The Mayflower which doubles up as a fish and chip eaterie and a pub which they opened at the back in 2009. It has four pumps having a mix between regular and guest beers. I opted for the Hop Monster Freakshow 5 (4.2%), from a local Southend Brewery, which was a full on Citra beer which complimented my excellent fish supper. It was so nice , floral and hoppy that I ordered another to enjoy in the small estuary side beer garden whilst my fellow crawlers enjoyed another pint of St Austell Proper Job.

It was at this point that we decided to scrap the next two pubs on our itinerary which I have been to before and only recommended due to their location rather than the average quality of their beer (The Old Smack and The Peter Boat) and head to our final port of call (ho ho) which is the other Good Beer Guide pub in the area, The Crooked Billet. 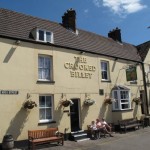 The Crooked Billet is a Nicholsons runpub with six hand pumps serving beers ranging from their own brewed beer (well from St Austell and Nethergate) with an ever changing range of guests. I also believe it’s the second oldest building in Leigh behind St Clements church. The pub was pretty packed both inside and out at this point with banter being exchanged with locals and visitors alike whilst British athletes celebrated Gold Medals in the 5000 metres (go Mo!) and a pulsating anglo-Irish boxing final.

The beer being drunk was a delicious pint from the Hawkshead Brewery in the shape of Windermere (3.5%). It’s a lovely pale beer which also went well with a half a pint of whelks I picked up from the sea food stall across the road. We finished the night a bit like Vic & Bob sitting by the dock of the bay (well the beer enclosure)as the sun set over the Kent power stations far across the Thames.

Leigh-On-Sea has a number of pubs but as we found out only three are worth visiting. If you are in the area try The Brokers, Mayflower and Crooked Billet. Of course there is more to Leigh-On-Sea than beer and it’s certainly worth the 50 minute train journey from London Fenchurch Street to just walk past the cockle sheds and into Old Leigh.

One Response to Leigh-On-Sea Pub Crawl