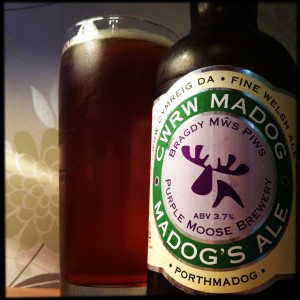 This isn’t going to be the best review I’m afraid.
It’s going to be a bit negative.
But if I’m to review everything I try then I’m also going to be honest.
I’ve already mentioned recently on Twitter that I’m losing interest in most beers under four or five percent ABV, not all but most, and I’m afraid that this beer is the embodiment of why that is.
I also realise that this is to do with the my own personal preferences, but then I’ve never sold myself as an expert in such things.
What I will say though is that when I talk of my lack of interest in lower ABV beers I’m talking on the whole about bottles and not cask or keg where I still find plenty to enjoy.
So then, this ale by Purple Moose pours a very appetising copper orange but has an aroma so light that it’s almost non-existent.
And the flavours?
It tastes of beer I suppose.
Actually, if I’m going to be brutally honest, it tastes like last night’s beer.
A memory of beer.
Caramel flavours so indistinct that they’re only just there and hops that leave some crispness but provide so little bite that you want to give them a slap and tell them to grow up.
Sorry, but that’s the way it is.