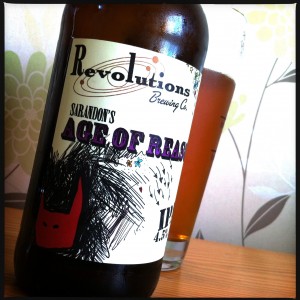 This is a difficult one to review for me.
As far as I know this is the last bottle in existence and I’ve been saving it for IPA Day 2012.
I nearly opened it a month or two ago and then changed my mind.
Not only is it a beer that was brewed by my friends, but it was brewed to celebrate my band’s last album release (predating Elbow’s effort pop pickers), and it was one of Revolutions’ first beers and their first try at bottling.
It’s also a single hop IPA, the hop in question being Chinook.
Brewed in March 2011 and bottled shortly afterwards (there were only two or three casks that were available at two concerts around the time of the record release, one in London and one in Leeds), the beer has sadly started to break down and so what was once a filtered beer now has a bitty residue at the bottom of the bottle.
Setting aside the problems of ageing and working too from memory you can tell that this was an early beer from this brewer.
A brewer just finding their feet.
In hindsight it was a very raw beer.
Not in any way bad, just raw.
And you can still taste it in this final bottle.
The malts are toffee and biscuit but the backbone drops off very quickly, and meanwhile the hops are full of citrus bitterness and a big dry smack of lemon peel but the depth has gone.
It’s a bitter sweet drink for me.
It tastes like the memory of my band’s album launch.
It tastes like the memory of good times passed.
A ghost of the excitement and pleasure at having a beer made for us.
Andrew and Mark make some absolutely brilliant beer and in this bottle I can remember their past but also taste the beginnings of what they have become as brewers.
Now if you’ll excuse me I need a moment to reflect.