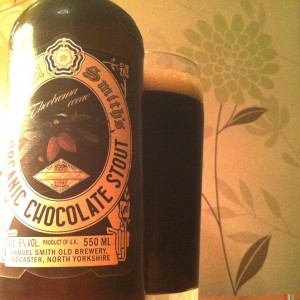 I was expecting a lot from this beer.
Maybe I was expecting too much.
As with most beers from this brewery it comes beautifully dressed with a lovely label and bottle shape.
I suppose if you have a massive sweet tooth this might be right up your street.
You see this is an organically brewed stout with a massive chocolate presence.
A beer wrapped in a bar of chocolate.
Unfortunately it’s also been filled with spadefuls of cane sugar.
And given that in general ingredients lists work in order of greatest to least, telling you that sugar is third on the list after water and barley will go some way to explaining just how sweet this is.
Tongue numbingly sweet, that’s how.
Yes the chocolate is clever.
It’s thick, chewy, mouth coating and seductive, but it’s ruined by the biggest sugar blast that simply wipes out everything in its path.
There are touches of coffee and a hint of dry leafy hops but man alive I can’t tell you enough how I can’t handle this sugariness.
In the end I poured two thirds down the sink as it made me feel a bit sick.
It also left a rather unpleasant greasy bitterness that needed a pint of water to clear out.
I think I need to brush my teeth.