Last weekend I was due to travel over to Shropshire to visit my daughter Maisie (@maisietabitha) and my old mum.
It would be one of the last visits there for a while as in September Maisie would be starting university just down the road from me in Leicester.
And it just so happened that arch CAMRGB person Mark (@Landells) was in the area that weekend too and so we decided to meet up so I could show him some of the pubs around Shrewsbury and take him to my favourite pub of all, The Wrekin Tap at The Cock Hotel.
I called a couple of old friends to see if they were available and mentioned on Twitter that we were planning some drinks and all of a sudden I had on my hands a group of about six and a mini #Twissup as James (@jamesbwxm) of the Sandstone Brewery said he was going to make the short hop over the border to join us. 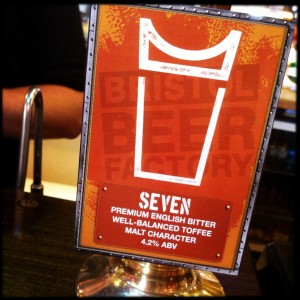 So it was that early Saturday afternoon I and Maisie were joined initially by Paul (@PaoloFernley), Darren (@circa79pritchy) and the non-tweeting Fig.
We met at The Salopian on the banks of the Severn and settled down with halves of Bristol Beer Factory’s Seven (4.2%) (you see what we did there?) which was OK but not quite as good as we were expecting.
As we caught up on each other’s news we moved on to Salopian’s Oracle (4%) which in my book is a stone cold modern English classic, big and rich and with a super sharp hop riding across the top.
I say we drank these beers, but I mean everyone except for Fig who steadfastly stuck to Carlsberg for the whole day.
He drinks beer like he used to play bass, with one string and a heavy pick.
As we were trying a very disappointing half of RedWillow’s Feckless (4.1%) with a chaser of Flying Dog’s Raging Bitch (8.3%) we were joined by James who grabbed himself a pint of the Feckless and agreed with our summation that there was something not right about it.
The Raging Bitch however was a pure American craft pine rich hop explosion. 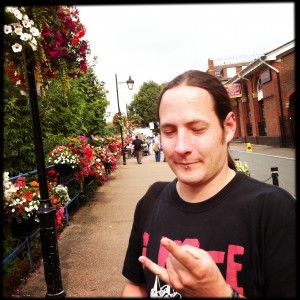 James sorts his fingers out.

After popping to the bar to buy everyone a Delirium Tremens (8.5%) and blurting out something unsavoury regarding several men and Maisie we took the short walk along bank of the river to The Armoury, a pub in Shrewsbury I’d not visited before.
It’s a lovely building with a huge open plan olde worlde feel and serves posh food to the posh and well to do of the town.
Needless to say we stuck out a bit and stayed for only a quick half.
I had an unremarkable but not wholly unpleasent Three Tuns XXX (4.3%) before we wandered across town to one of my favourite pubs, The Three Fishes. 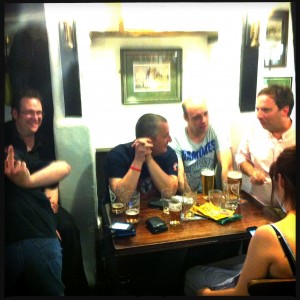 Walking up to the tiny but perfectly formed bar every one of us made a big sighing noise as we spotted Hawkshead’s fabulous NZPA (6%).
The sounds of pleasure we made as we drank were the sounds of deep unadulterated joy and NZPA with it’s super clean, perfectly rounded malt and high flying citrus hop was the highlight of the whole day for me.
At this point Mark finally made it, said hello to everyone, drank a quick pint and then left with me and Maisie as we had a date with food at my mum’s house.

We said our goodbyes and left Darren, Fig, Paolo and James to the lovely surroundings and lovely beer of the Three Fishes and jumped on a train to make the short journey to Wellington.
My mum had made chicken with rice and peas (an old family favourite from our days living in Jamaica) and we washed it down with a shared bottle of Durham Brewery’s White Stout (7.2%) while we watched the majestic Mo Farrah win his second gold medal.
Our chests swollen with pride (or was it wind) and our bellies swollen with food (and beer) we headed the fifty yards up the road to my favourite pub. 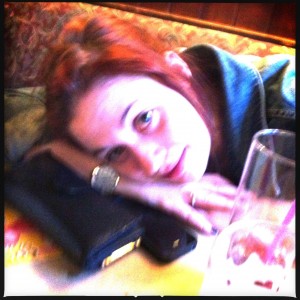 Maisie’s had a long day.

Yes, I know I go on about The Wrekin Tap but it’s a very special place to me.
It’s not the most beautiful pub outside or in.
It has a warmth and friendliness that has been lost from many pubs, but most importantly it has the happy ghosts of my past in it and when I sit there, either alone or with friends, I feel completely safe and sound and at home.
The beer is always beautifully kept and there’s always the background hum of friendly conversation.
I wanted to show Mark some of this.
I’m sure he’ll put me right on this but as we went in I think he was a little underwhelmed, but by the time we left I think he’d started to see what it is I love so much about the place.
As we went to the bar and said hello the the landlord I started with a half of Holden’s Special (5.1%) which was a decent hard working bitter with a nice malt and a pleasant dry finish.
Good, but ironically, nothing special.
At this point in the proceedings Maisie, after slumping across the table for a bit, decided to go home.
She was tired.
It had been a long day and I have to say she’d equipped herself very well. 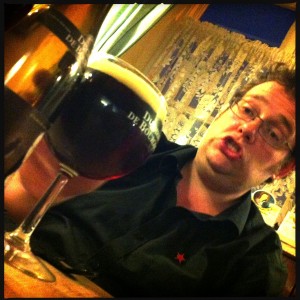 Mark and The Duchesse.

After she’d gone I headed for the pub’s Belgian Bar and bought Mark and myself each a bottle of Duchesse De Bourgogne by Brouwerij Verhaeghe (6.2%).
I’d not tried this beer before and it was a bit of a revelation, almost winning beer of the day.
But not quite.
Described as a “Flanders Red Ale”, the body is meaty and bordering on sour with a deep and dense port flavour and a dry tannin feel to the finish.
We stopped talking for a while and quietly savoured what we had in front of us.
; 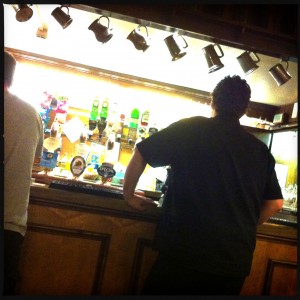 And then we got silly and let the gnomes out.
Off to the bar Mark trotted and came back with a big fat bottle of Brasserie D’Achouffe La Chouffe (8%) and two glasses.
Sitting in the corner of the pub giggling and silly with a good friend and a big bottle of gnome fuelled beery greatness I was happy.
Eventually we had to call it a night and after popping back over the road for a cup of tea, Mark’s taxi arrived to whisk him back to his hotel and I fell into bed with a big smile and a slightly spinning head.

Another successful trip to Shropshire complete.
I’ve said it before and I’ll probably bore you with it again in the future, but if you’re ever in the area do visit Shrewsbury, it’s a beautiful town with some fantastic pubs.
Oh, and pop over to The Wrekin Tap too.

Thanks to all my chums and to my lovely daughter for spending the day with me.

One Response to Shrewsbury: An Informal CAMRGB #TWISSUP