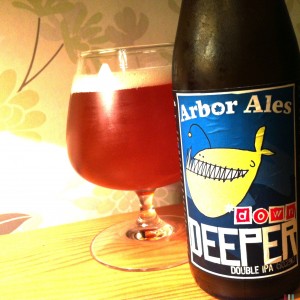 This is the last of my bottles of this beer, and probably one of the last bottles anywhere.
I know of one other person with a bottle and that’s Matthew of Total Ales, and he’s promised to open his at the same time.
Sitting here now in the cold light of day knowing that there may not be any of this beer left anywhere in the world gives me an odd feeling.
A melancholy feeling tempered by the excitement of memory.
Down Deeper was a beer that suffered a difficult birth.
It was brewed for the CAMRGB #DownDIPA Twitter event back in May 2012 but wasn’t really ready and as a result it got a whole bunch of disparaging reviews, Matthew and I being amongst the small handful who could find things positive to say.
But now, a few months later and properly matured this is one hell of a beer.
Pouring a deep tangerine with a fluffy cloud of a head that collapses to a sexy ring of bubbles, the smell is fried bananas, rum, apple juice and sour jelly sweets.
The malts are sticky toffee and biscuit crumbs, but it’s not as simple as that as the sticky toffee is like super glue and the biscuit crumbs are hefty building rubble.
But even the weight of the malt is just a platform, a bouncy castle if you like, on which the big hard scary gang of hops bounce around naked while waggling their bits at you.
Huge washes of orange juice full of spiced fruit cake, peppercorns, mustard seeds and lemon rind, and that’s just the beginning.
Next there’s a super bitter, dry, pithy rush of grapefruit flesh and white rum, blackberry leaves and sour fizzy sweets that become so bitterly dry that they scrape the skin from your tongue.
Many years ago a friend and I discovered some sweets called Sour Fish (I’ve just Googled them but can find no trace that they existed).
Anyhow, they were fish shaped jelly sweets coated in the most alkaline flavouring that our whole heads went dry and numb.
We would dare each other to eat as many as we could until we were quite ill.
This beer wonderfully mimics that dryness.
How I wish it had been completely ready for the #DownDIPA event.
As it is, this is without a doubt the best Double IPA I have ever tasted.
And now it’s gone.
Goodbye and thanks.

And here are a few words from Matthew (@totalcurtis) about his final bottle: 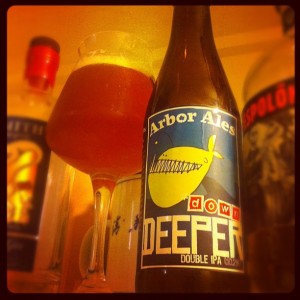 Although I enjoyed my first bottle of Down Deeper there was this nagging feeling that something wasn’t quite right. I’m not a brewer and although I’m currently doing a lot of reading to try and increase my knowledge on the subject I still don’t quite understand the fundamental dynamics of bottle conditioning but thanks to my experience with this particular beer I’m starting to gain a better understanding of how it works. In my original blog on Down Deeper I remarked on how the beer had almost zero carbonation and with its boozy, syrupy flavours of candied citrus fruit it had more in common with a Barley Wine style ale than a Double IPA.
Luckily both Simon and I had another bottle stashed away in our cupboards and so we agreed not to open them until the end of August and drink them once the beer had time to finish its ageing process. On Saturday night the time came to open up Down Deeper once again and we both couldn’t have been more surprised and delighted with the results.
When I first poured Down Deeper back in May the chill-haze heavy liquid oozed into the glass and failed to produce even a wisp of a head. This time however a gorgeous golden orange syrup emerged from the bottle and as it rose up the glass I was happy to see that a tightly packed half-finger head of foam had not only formed but was staying put, the first sign that this beer was now at its best. I pressed my nose as close to the beer as possible without getting it wet and huge chunks of tangerine and clementine lept out of the glass and into my sinus. There were also subtle notes of grapefruit, honey, alcohol and as the beer warmed I also detected hints of elderflower, the complexity of this beer seemingly expanding with each inhalation.
After taking my first sip I put my glass down and simply exclaimed ‘wow’ as now the carbonation was present it brought forward a huge bitter hop hit which announced that this beer was most definitely a double IPA and not a Barley Wine. Flavours of grapefruit and lavender were followed by globs of honey and a long bitter finish which carried with it notes of coriander and black pepper. As it warmed the complex, spicy flavours came further forward increasing the already enigmatic intricacy of this impressive beer. Although it doesn’t quite have the citric, resinous quality found in some of the more well known double IPAs it still has bags of an albeit more ‘British’ tasting bitterness. One final thing I noticed was how boozy my original bottle tasted and how well hidden the alcohol was now that the flavours and carbonation had properly developed.
So I’m really glad I decided to purchase that second bottle, and thanks to a little patience it has developed into an absolute stunner of a beer over the last couple of months. Now, how do we go about trying to convince the nice chaps at Arbor Ales to brew another batch?

Thanks to Matthew for writing so well about a beer that means so much to me, and thanks to the good chaps at Arbor Ales for brewing it.
I wonder what their next monster will be?