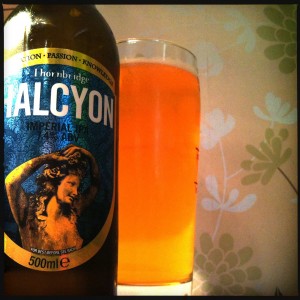 I am about to say something negative about Thornbridge.
Just thought I’d get that straight up front.
But before the heavies get sent around can someone please tell me the real difference between this Imperial IPA and Jaipur apart from a slightly higher ABV.
Thanks.
You see I can find very little difference at all.
Über sweet, sugary malts with a lick of sticky toffee followed by a decent fruity bit of hopping.
Mandarin and grapefruit and lemon and lime alongside a nice handful of fresh green herbs.
But the sweetness is sickly and cloying, like a spoonful of Demerara sugar.
A little while ago a few people, myself included, mentioned that Jaipur seemed to have changed almost beyond recognition.
It has become, in bottles at least, sweet and lemonadey.
And I’m afraid that Halcyon is only a matter of degrees different and I’m deeply disappointed by it, particularly given the fact that when this was originally bottled as part of Thornbridge’s limited range people raved about it.
Mind you, from what I was told by chap who sold it me, this is more or less a completely different recipe to the original bottle conditioned Halcyon that was too expensive for me to try last year.