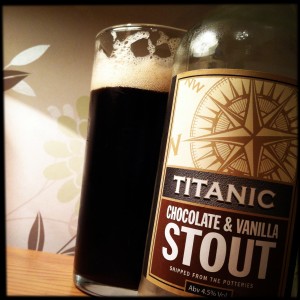 I first had this beer at the Shrewsbury Beer Festival in 2011 and it was, quite simply, a brilliant beer full of deep rich chocolate and sweet yummy vanilla.
It was the beer equivalent of a super Belgian chocolate dipped in beer.
Sadly Titanic have completely knackered it by sticking it in a clear bottle.
These days I generally refuse to buy beer in clear bottles but I received this through the post and so had no idea what it would come in.
The beer poured OK but smelled of cabbage and cardboard, none of the sweetshop aromas I remembered from before.
And then taking a mouthful what I remember as a beautifully weighted, creamy thick chocoalte fueled stout has been reduced to an acrid, woody and overly bitter beer.
And the vanilla no longer exists.
I managed a third of a glass before I poured it away.
If you see this beer in cask or keg then try it, it’s absolutely terrific.
If you see it in a clear bottle in your supermarket then, well, the choice is yours.

NB: This is not an attack on Titanic who make some great beer. In fact I have a bottle of White Star for this evening which I’m really looking forward to.
And it’s in a BROWN bottle.
I wonder.
Should we start a campaign against clear glass?
The only reason I can see for using it is that some marketing person thinks it looks good on the shelf.
And it does.
But it kills beer.