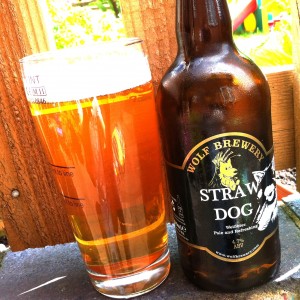 This beer is the last of my haul from our trip to Norfolk and I’ve been putting off trying it as I’d not noticed it was a Weissbier until I got home.
But I’ve poured it and I’ve tasted it and it’s a pretty good beer.
Pouring a light sunny yellow, Straw Dog isn’t overly fizzy and has a nice smell of yeast, lemons and apricots.
Taking a drink the beer begins with a sharp metallic yeasty flavour with a good blob of honey coming up quickly behind it.
There’s a light, almost crisp, wafer biscuit hiding in here too which cracks to let the hops in.
And the hops are soft and really rather good.
They’re snappy and fresh and bring a zesty sharpness that leaves a decent dry zingy finish.