Posted on September 2, 2012 by Simon Williams 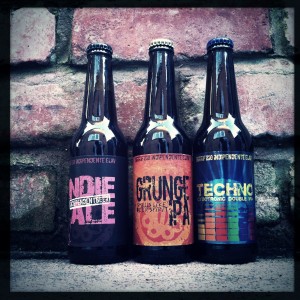 Birrificio Indipendente Elav is based in Bergamo in the north of Italy and their latest bottled beers, all based around musical styles, have recently started to filter in to the UK.
Though a little pricey they’re well worth searching out based on this, my first experience of them.
Looking around the brewery’s website I get the sense that while naming their beers after musical styles they may also be big fans of Consorzio Suonatoru Indipendenti (CSI), a political Italian band who were big with many of my friends when I was living over in Pisa.
Of course I may be, and probably am, completely wrong.
Shall I talk about the beer instead?
OK, here goes. 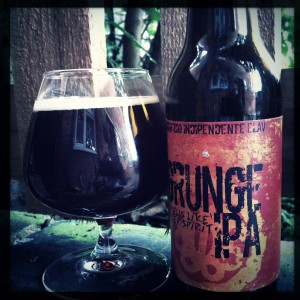 Grunge IPA (6.3%)
I was never a fan of Nirvana.
I saw them at Edwards No. 8 in Birmingham on their “Bleach” tour where they were supported by Tad.
I loved Tad.
From the moment that Cobain walked off stage in a huff because an audience member had dared to touch his microphone stand I didn’t like him.
Instead I hung out backstage with Tad Doyle who was a dude.
So a bottle that says, “Smells Like Beer Spirit,” across it does nothing for me.
That said the beer itself is really rather good.
Pouring a very deep amber hued American IPA colour (think HopDevil or Myrcenary), the smell is big and deep, resinous and woody.
The flavours follow suit with a malt so dense it’s like a big fat varnished sideboard of beer.
Enormously woody (did I say that already?), you get a lovely lump of thick gooey toffee, burned at the edges to give a good bitter burned sugar tinge.
The hops are bitter, full of lemon pith and grapefruit skins, crisp and crunchy woodland litter steeped in resin rich pine needles.
My only problem is that this bottle’s just a little flat whereas the one I had yesterday was good and bubbly.
Other than that this is an exceptionally good beer. 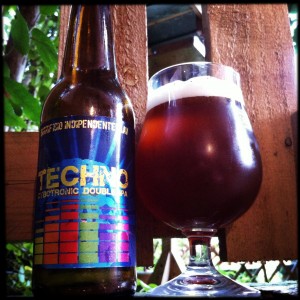 Techno Double IPA (9.5%)
Though Acid House and Raving happened when I was the right age for it, coming along in my late teens, I was never very interested.
I liked the music, at least some of it, the more ambitious end like The Orb for example, but I was far too busy playing in and going to the slightly grimy joints in town.
I’d rather be at Manchester’s Boardwalk watching Dog Faced Hermans play guitars than The Haçienda watching some DJ play records.
If my terrible Italian serves me right then on the side of this bottle it says that this beer will give you the feeling of an, “Extra Sensory Rave Party.”
It won’t.
But what it does do is give you a lip smackingly dry and delicious high octane half hour.
If you can make it last that long.
Techno pours a very sexy rich amber with just the hint of a head.
It’s smell is tropical fruit chews, rum and sweet nail varnish.
The malts here are heavy and almost over ripe, pregnant with toffee, and very very boozy.
There’s a bran filled biscuit in here somewhere too, calling out in the distance and almost lost but adding a cereal roundness that works well against the stickiness of the toffee.
The hops are seedy backstreet hoodlums, all greased hair and zoot suits.
Cool and sassy, they’re the ones who’ve made your malty girlfriend pregnant and now they’re reminding you of the fact as they whip you with super bitter, resinous, über crisp brown leaves, mandarin skins, apple cores and Semtex.
Techno almost out hardcore’s Hardcore.
It’s one violently fun, supercharged beer. 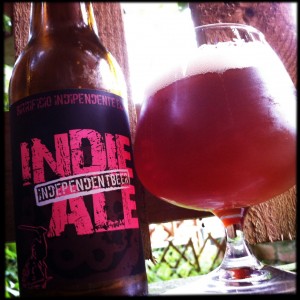 Indie Ale (5.5%)
What does Indie mean to you?
Does it mean the marketing depts guitar by numbers of Travis or Coldplay or does it mean, as it does for me, the thrilling independently made music as championed by John Peel through the 1980’s?
The music that defined my teens.
Everything from the twang of The Smiths through to the grind of Napalm Death, the jangle of Microdisney to the electronic heave of Laibach.
Elav’s Indie Ale is a thick amber and holds its bubbling quiff of a head up high.
The aroma is fruity, foam bananas, vanilla ice cream and red wood.
There’s a digestive biscuit at the base of this beer and on it sits caramel, cross legged, wearing desert boots and rolling a cigarette.
Around it hang hoppy posters of acidic lemon rind, cool grapefruit flesh, snappy popping peppercorns, mace and jelly sweets.
Indie Ale is chewy, very chewy, it’s viscous, mouth fillling and delightful, and it finishes with the longest locked groove of dry bitterness.
It’ll leave you happy in the haze of your drunken hour to misquote Morrissey.