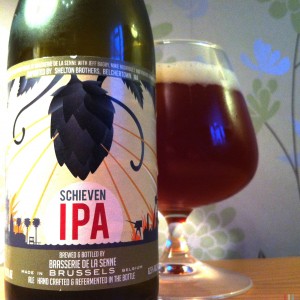 This is a collaborative brew between De La Senne, Jeff Bagby of Pizza Port and Mike Rodriguez of Lost Abbey and it’s a rather marvellous beer that very coolly mixes American IPA with Belgian Golden Ale.
Schieven IPA pours a luxurious amber and smells in equal parts resinous, sweet and full of apple cores and yeast.
The beer feels good too, and that’s not something I often comment on in my reviews, but it sits beautifully on your tongue.
Slightly oily, slightly heavy, it kind of loiters with intent.
The malt is chunky biscuits and honey, ground spices and a touch of Dr. Pepper that washes around in a sea of clean and astringent Belgian yeast steeliness.
And then the hops hit.
Monstrously dry and sharp with spiky hedgerow greenery and West Coast orange rind, gooey and sticky pine resin and fresh orchard dewy branches, that leaves a teeth grittingly long dry finish.