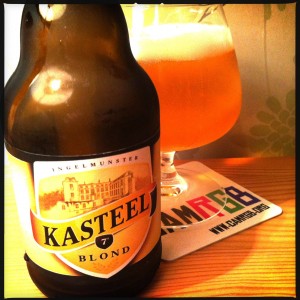 There’s a heck of a lot of sweetcorn in here.
The beer pours a golden corn, smells of maize and definitely has a large dose of it in the flavour.
And I hate to say it, but that’s pretty much it.
There’s a little lemony twang that snaps at you and a yeasty fuelled clean brillo pad that scours your tongue, but this is just about the worst Belgian beer I’ve yet tasted.
I imagine I’ll get a load of people telling me why I’m wrong.
As my beloved Vonnegut would have said, “So it goes.”