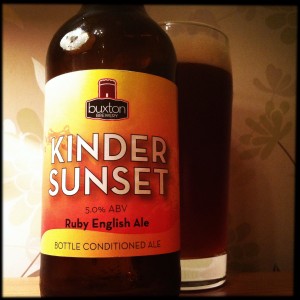 This week I got hold of a mixed case from Cotteridge Wines.
I’m very lucky as they don’t currently do mail order but we have a mutual contact in Leicester who is happy to bring my orders for me when he travels down to Birmingham, and so I asked them to give me a random selection from their shelves and was very pleased to see this in the box.
Kinder Sunset is an English Ruby Ale like no other.
The colour is a superbly deep and thick orange marmalade with a foamy head that doesn’t so much collapse as settle down to a ring of appetising bubbles.
Kinder’s aroma is an incredibly inviting mix of childhood Jelly Babies fruitiness and grown up spiced orange.
When pouring a beer calling itself a Ruby Ale I’d be expecting the usual digestive biscuits and bran blah blah blah, but this is different.
Yes there’s a biscuit base but it’s hiding right at the edge out of sight.
It’s the organiser of this beer event and it’s only just there to make sure everything else happens.
The fruitiness here is startlingly rich, with a pear juice base infused with peaches and apricots and glued in place by sticky treacle toffee.
Waves of sweetness and spice roll across your tongue bringing black pepper and a little cardamom before the hops present you with a huge bunch of flowers.
A bouquet of garden petals underpinned by spiky gorse bush prickles and tongue drying mown grass juice leaves you with a finish that simply doesn’t want to end.
Super.