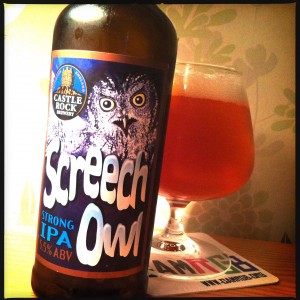 This is another of the beers from this year’s Sainsbury’s Great British Beer Hunt and I’ve seen one or two decent reviews of it, but I find it singularly unpleasant.
Screech Owl is super harsh, but not in the full frontal assault packed with flavour way of, say, Magic Rock or even, dare I say it, BrewDog.
This is harsh in a paint stripper and super glue way.
The smell is bitter and has a weird background hum that I can only describe as Eau De Urinal.
What malts are here just peak through with lazy toffee before they’re kicked in the guts by a lemon fresh washing up liquid soapiness that dries your mouth in all the wrong ways.
This one’s so bad I poured most of it away.