Posted on September 1, 2012 by Simon Williams 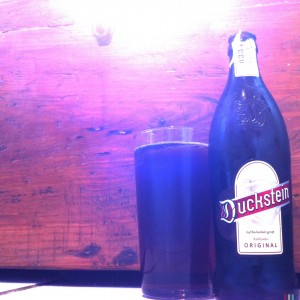 A beautiful bottle, a beautiful label, and a rather beautiful beer, Duckstein’s Rotblondes pours a dark red brown with a little head and the smell is caramel heavy with light spiced peppery flecks.
The malting is soft sweet toffee, a little drizzle of honey and a wedge of bitter burned brown sugar.
There’s also a wispy hint of chocolate right at the back that fill sin all the gaps and acts as a cushion for the tinned red fruit to lounge on, all of which gives a rather comfortably plump body.
The hops are by no means large, but they do have enough of a presence to give the beer a decent edge, with dry straw and leafy pith, some crisp lemon rind, a large glug of elderflower water and a cracked peppercorn crunch that hangs around for a good while after you’ve swallowed.
I like this a lot.