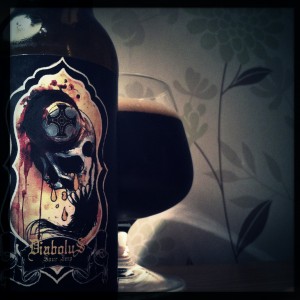 I’m really not sure what to say about this beer.
I’m not a fan of sour beers and so perhaps I shouldn’t be reviewing this because I won’t be giving it a fair crack of the whip.
The thing is, if you like sour beers you’ll love this little bottle of black hole deep, moody as hell, cheese, coke and vinegar, bitter as gall beer made by introducing gueuze yeast to their Imperial Stout.
Why I’m continuing to write about Diabolus is because I think it’s an extraordinary thing for a small brewery like Durham to do.
It’s brave, it’s bold, it’s extreme in every way and it makes me love them even more.
Over the last twelve months they’ve delivered superb beers, from their White Stout, through their Belgian Quad (Bede’s Chalice) to their Imperial Stout, Temptation.
Diabolus is the next step on their journey to the very cutting edge  and although it’s in no way a beer I enjoy drinking it’s a glass of something rather special.
I just wonder where they’ll go next.

One Response to Durham Brewery Diabolus (10%)