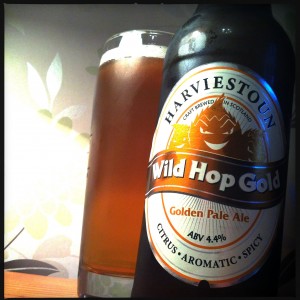 This is my second beer from Sainsbury’s 2012 Great British Beer Hunt and is described as a, “Citrus, Aromatic, Spicy Golden Pale Ale.”
It’s not a bad beer by any means and in fact it tastes really rather good.
But I have a bit of a problem with the smell.
Citra can smell of cat wee.
In fact it can smell quite intensely of cat wee.
I was taught this fact by Jake at Salopian Brewery who once held out a handful of dried hops and told me to put my face in them.
“Cat wee,” he said.
“You’re right, “I replied.
There must be an awful lot of Citra in here as that, to me, is what Wild Hop Gold reeks of.
Cat wee.
The colour is good, golden and nice.
The malt is light but definitely in attendance with some very good runny caramel edges.
And the hopping tastes great, all big bold citrus flavours, lemons and limes, some peach and passion fruit too, and one hell of a long dry finish.
But that smell.