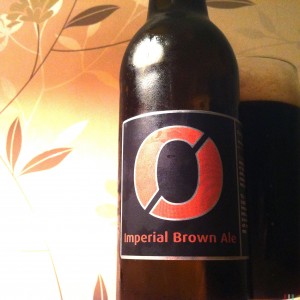 I recently took out a subscription to a monthly beer club wherein I receive a random selection of beer to surprise and delight me every four weeks or so.
When it arrived I was pleased to see several beers I’d not tried alongside a couple of old favourites.
This is the first I bottle I pulled out to have a go at and I’m not sure what I make of it at all.
I took my frist sip and thought, “Ooh! That’s nice!”
And then on my second I wasn’t so sure, and this confusion is continuing with every successive mouthful.
Imperial Brown Ale is the colour of thick tanned leather ro the face of a fairground worker and holds a head that’s foamy and cream.
The aroma is cheap chocolate bars, salted nuts and plump raisins, and there’s a heck of a lot going on in here which is where my confusion is coming from.
First you get a large hit of liquorice that’s rather like being attacked by Bertie Bassett.
He’s quickly followed by a gang from McVitie’s, slightly drunk on rum, who hurl over baked chocolate digestives at you.
Then there’s boozy prunes that form a pillow for the dry, woodland flavours of the hops.
Sappy and fresh, they wring your tongue out and make you reach for your glass.
And now I’ve written all this down and read it back I’ve come to a conclusion.
I like this beer very much.