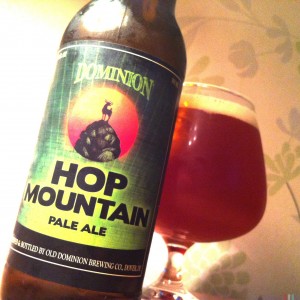 Hello American bottling.
Having cracked this open with a bottle opener I find that Dominion’s beers have twist caps.
Hop Mountain is, I guess we can safely say, what has become a classic American Pale Ale.
For a start it’s not very pale.
In fact it pours a deep deep amber with a floaty lick of a head.
The aroma is orange marmalade, wood resin, maple syrup and spice and its malts are, to say the least, robust.
Great big fists of honey laden pumpernickel, bran heavy and deeply satisfying.
The maple syrup in the aroma pops up again too, along with salty peanut brittle and burned toffee.
The hops start slow and build as you drink, taking over your face.
Beginning with a fresh and rather perky squeeze of lemon juice and moving menacingly through the gears into resinous redwood leaf litter and orange flesh, the finish is thick with grapefruit skins and cracked lemon pips, super dry and super fly.