The Lamb Beer & Liquor: High Times On The Holloway Road

I’d been waiting a long time for this.
A whole four day festival with the CAMRGB logo attached.
And so it was that on Saturday morning I jumped on a train and headed down to London to drink beer and meet people and have fun.
I arrived into St. Pancras at 12.30 and made the five minute walk down to the Euston Tap where I was to meet Chris (@ckdsaddlers) and Mark (@landells) for a preliminary drink.
I grabbed a lovely half of Marble Pint (3.9%) and just as I took a sip Chris showed up.
We caught up on news and then as Mark walked through the door I had a half of Hawkshead Red (4.4%) which was like sucking a yummy lump of toffee.
We waited around and chatted until Mark’s friend turned up before the three of them headed over to Camden to visit Brewdog and the Camden Town Brewery. 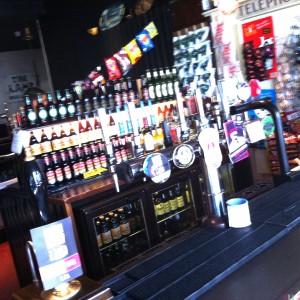 Beers On Parade At The Lamb.

I didn’t join them as I was on a very tight budget and too excited about getting over to The Lamb (@thelambpub) to see what it was like.
The walk from Euston to the Holloway Road takes about a quarter of an hour and I decided to go up the Caledonian Road to get there.
It was a lovely crisp and sunny day and I arrived at The Lamb to find them just opening and setting up the DJ gear for later on.
I said my hellos and had a quick look around the pub.
With wooden floors, a mixed array of seating from comfy sofas to bar stools, the atmosphere even early on was warm and friendly and I knew from that moment that we would be in for a good time.
All the keg beers were served from the bar while the casks hid on racking around the back and the selection of bottles were displayed invitingly in their chillers. 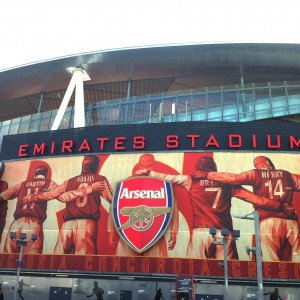 This might be a beer blog, but this is my team.

I am, as some of you will know, an Arsenal fan and with the pub being five minutes from the Emirates Stadium I had to go and have a look.
You see I’d left London before my team moved from its Highbury home and up to this point had only ever seen the new stadium on the television, and so I spent twenty minutes wandering around it and taking photos.
I got back to the pub and met Martin who was to be the DJ for the day. He’d served his time in the 80’s in a ska band called The Potato Five and we had a lot to talk about as we shared a drink or two.
I started with a kegged Kernel India Brown Ale (5.5%) which was very nice and rather woody and followed it with Otley’s Oxymoron (5.5%), a very good Black IPA from cask. 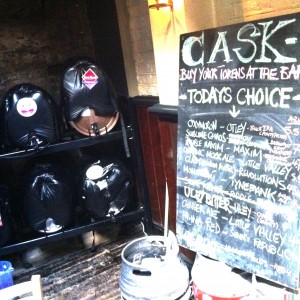 Just as my food was served (a very good chicken curry held in a hollowed out loaf of brown bread) my old friend Anthony (@scissorkicks) arrived.
We’d not seen each other for almost two years and had a lot of catching up to do.
This was done over a London Fields Galaxy IPA (5.1), another beer from keg and really rather good.
It was now early evening and more and more people were beginning to shuffle in to the pub, among them a whole bunch of CAMRGB members who I was yet to meet.
Old friends Nik and Erika also arrived.
Nik helps out at The Kernel doing a lot of their bottling and they’d popped in on the way home from there to say hello and have a quick pint.
They were accompanied by The Kernel Monkey who’d not left the brewery before.
It was an honour to have him with us. 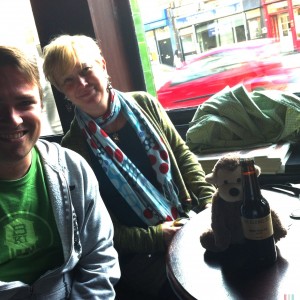 Erika, Nik and The Kernel Monkey.

I drank a half of Little Valley’s Moor Ale (5.9%) and Sunny Republic’s Huna Red (4.2%) which were both from cask and both disappointingly flat, and just as I went back to the bar I was introduced to Justin (@1970sBOY) and James (@jmpegler) who had travelled the few miles down from Essex to have a drink and a natter.
It was then that we were introduced to Steve, a local home brewer who had brought a bottle of his Black IPA for us to try.
It was duly shared between five or six glasses and we all agreed that Steve is rather good at brewing beer.
He’s a nice chap to boot.
More friends rolled in as the sun started going down and while enjoying a Black Isle Blonde (4.5%) I was able to catch up with old friends Keith and Rhodri (@rhodri), neither of whom I’d seen for over twelve months, and Tom who drums in my band and I don’t see often enough. 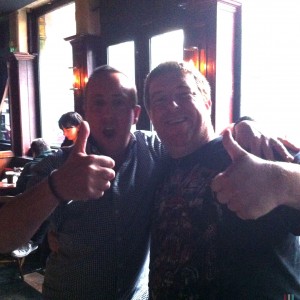 I looked around the pub to find wall to wall people drinking and laughing and generally having a good time and I was happy.
This is what good beer in a nice environment can do.
There was music from the DJ, but it wasn’t overpowering, more a pleasant background to everyone’s conversation.
Andrew (@sheriffmitchell) and Emma (@minkewales) turned up and over a glass of Anarchy Lager by Anarchy Brew Co. (7%) we talked all things CAMRGB, beer and good things.
I have to say that Anarchy’s Lager was my beer of the whole weekend, crisp and clean and sparklingly good I could have happily drunk it all evening.
At some point Steve (@carsmilesteve) arrived and we said hello but I’m afraid that I may have been rather the worse for wear by this point. 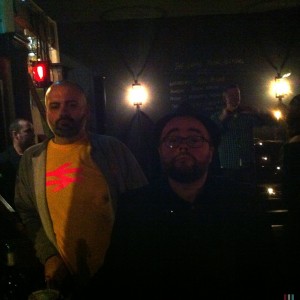 However that didn’t stop me enjoying a crisp bottle of Jever Pilsener (5%), Bear Republic’s Hop Rod Rye (8%), Beavertown’s Smog Rocket (5.4%), the latter being shared with Kristian (@3FriendsBeer) of the Three Friends Brewing Co. who had very kindly brought me a bottle of their experimental Saison to try.
I ended the evening by introducing Keith and Tom to the delights of Magic Rock’s Human Cannonball (9.2%) and shortly after someone took me home and put me into bed.

I woke up very early and feeling rather the worse for wear on Sunday morning.
It was 6.30am and my train didn’t leave until 12.30.
I got up and dressed and made a decision to go and walk around London.
You see when I lived in the city I would often go out early and wander around exploring and so I thought I may as well do the same as I was hung over and broke.
What I hadn’t intended to do was walk approximately fourteen miles in four hours carrying a rucksack and a large bag of beer. 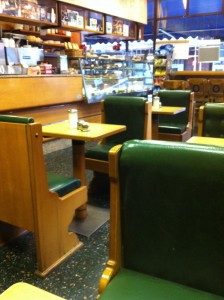 My route for the few of you who might be interested was a basic circuit of the city north of the river and I must say I was surprised at how much of it I still remember after having left the place eight years ago.
I headed out down the Holloway Road, nicked across to Caledonian Road and down to King’s Cross.
I grabbed a coffee and headed along Euston Road, onto Marylebone Road and stopped for ten minutes in Regent’s Park to drink my drink and watch the joggers.
Then I wandered down Harley Street, hung a left and crossed Regent Street at Oxford Circus.
At this point I was looking for some breakfast and so I went down Wardour Street to a small Café for cheap bacon, sausages and egg.
Having finished I continued down Shaftesbury Avenue to Piccadilly, cut through Haymarket, passed Pall Mall, crossed The Mall and walked down the road between Horse Guards Parade and St. James’ Park.
Turning left at Birdcage Walk I headed to the Houses Of Parliament before hanging a left up Whitehall to Trafalgar Square. 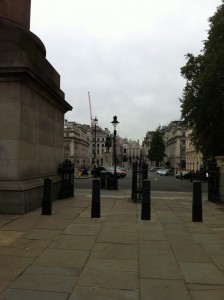 London in the morning.

By this point it was getting on for 9am and the crowds were slowly coming out as I walked along the Strand onto Fleet Street, turning left up Chancery Lane and right onto High Holborn.
This led me along Holborn Viaduct towards St. Paul’s Cathedral but before getting there I turned left past St. Bartholomew’s Hospital, walked through Smithfield Market and crossed onto St. John’s Street.
Around this point it began to rain and I found myself with a rucksack, a bag of beer bottles and an umbrella as I made the long and now rather damp walk up St. John’s Road to the Pentonville Road.
Turning left I wandered down the hill passing The Lexington and ended up back outside St. Pancras Station in time for a coffee and a sit down before my train.
As I sat drinking my Americano and grumbling about how much my legs, as well as my head, hurt I couldn’t help feeling rather melancholy.
I missed London.
I wanted to be living there again.
It felt like home.
I knew it would be a passing feeling and when I got back and saw my children I’d be OK, but at that moment I wanted nothing more than to be only a tube ride away from home and able to see all my friends again and wander London some more.

Thanks to everyone who came along to The Lamb Beer & Liquor, to the staff for being so generous and to Neil and Tariq for organising a brilliant little beer festival and a super little pub.

3 Responses to The Lamb Beer & Liquor: High Times On The Holloway Road