Posted on September 6, 2012 by Simon Williams 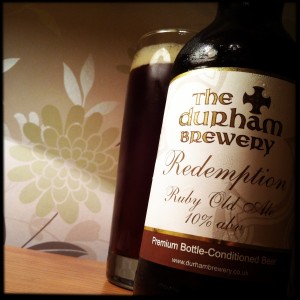 So here we are at my third and final bottle in my little Durham Brewery experiment.
I got hold of three bottles of Redemption when they were super fresh and not yet ready for sale, tried one straight away, one after three months, and now I’m having one at six months when the beer is supposed to be just right.
Truth be told there’s a slight cheat going on here and I should really confess that I opened my third bottle about three weeks ago as I just couldn’t resist it and then, having been told off by Elly from Durham Brewery, Jaswinder at Cotteridge Wines came to my rescue by telling me he had one last bottle left from the same batch I’d initially got hold of.
So what has six months maturing done to this beer?
It’s rounded off all the corners and created a pudding of a beer that you could eat with a spoon.
Pouring a deep red with a creamy head, Redemption smells of brandy, forest fruits and biscuits.
The flavours are enormous and comforting, like a rather drunken beery hug, a deeply satisfying malted biscuit swamped by toffee and rum, raisins and sultanas.
And there’s a saltiness too, almost Marmite but not quite, it’s big and meaty, filling and warming and wonderful.
The hops have become red autumnal leaves, crunchy under foot with a hazelnut pithiness, and then there’s a cherry brandy doused lemon rind that finishes Redemption with a long lingering late night boozy heat that’s the equivalent of curling up in front of an open fire in your pyjamas.
I wonder what this will taste like in another twelve months?

One Response to The Third & Final Redemption: Durham Brewery Redemption (10%)