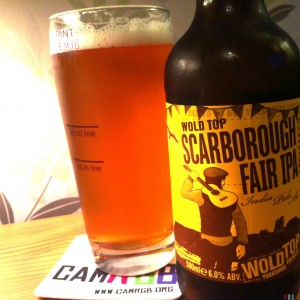 This is the first beer I’ve tried from this year’s Sainsbury’s Great British Beer Hunt and to be honest I have a feeling from looking at the selection on the shelves that this might be the best of a bland bunch.
There’s a lot of clear glass going on for a start, so that’s a third I won’t be buying or trying.
Anyhow, Scarborough Fair is a decent if unexciting IPA and 6% is a nice ABV for a supermarket beer.
It pours a sunny orange with a head that looks a little bit gloopy, and indeed glues itself to your glass in a most unappetising way as you work your way down.
There’s surprisingly little aroma here except for the vaguest hint of caramel and, um, beer.
You get a decent orange marmalade richness in the malts, fruity and round and sticky with toffee, and there’s a nice piquancy from some good spicy background flavours.
The hops aren’t quite muscular enough though they do have a good grapefruit citrus zing that leads you to a rather good dry finish.
But afterwards I was left with a nasty taste in my mouth, something I couldn’t put my finger on but that made me reach for a glass of water to cleanse my palate.
I read the bottle’s label and noted that this is a gluten free beer.
Could the process of removing the gluten be the reason for the weird head and funny aftertaste?
Just a thought.