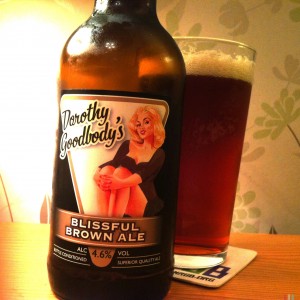 Not unpleasant in any way but deeply uninteresting, this is one of those beers with that logo on it and it tastes like it.
Blissful Brown Ale pours a chestnut brown with  light creamy head.
It smells of yeast and biscuits and the flavour is bran heavy digestives, a little toffee and burned sugar and a decent cup-of-tea tanin rich, dry elderflower water hop.
As I said, it’s not unpleasant but it could be any one of a million other beers.
And I’m  not even going to begin to talk about the name.