I was introduced to the world of Art Brew by Jon at Arbor Ales.
The two brewers had collaborated together on a rather fine barley wine and so, after making intial contact and trying their super (and wonderfully named) Bouncy (Scary Rabbit Beer), I decided I really needed a chat with them to find out what on earth is going on down in Dorset.
This is what happened.

Hello, could you introduce yourselves?
We are Art Brew – which presently consists of John and Becky Whinnerah (who also have three small children so is quite a juggling job) and as of October 2012, also includes Ant Kennedy, family member, who will be in the brewery one day a week and may well be taking over bottling. We make beer: Mostly hoppy and/or unusual beer.
Art Brew has been going for just over 4 years, before that we ran the multi award winning Royal Oak in Bath, a specialist real ale pub with twelve handpulls dedicated to micro breweries and small cider and perry producers.

So you’ve always been involved with beer in one form or another?
Before that, it all began at what was then called the Hobgoblin in Reading (now the wonderful Alehouse). Becky, an Exeter based painter on a rare holiday to Reading, as that is sort of her home (Art) went to what she viewed as her local, the Hobgoblin, and bought a pint. Behind the bar was John, the recently installed assistant manager (Brew). The evening went rather well and phone numbers were exchanged. Within a few months they were engaged because one evening, John was beating Becky at Scrabble AGAIN*, and she thought proposing was a good way of distracting him.
Previously, on their first (and only) date, Becky had asked John what he really wanted to do with his life. He said he wanted his own Freehouse and a brewery. So Becky said, “OK, lets do that then.”
We had our Freehouse within a year of marrying, and the brewery came along three years later. 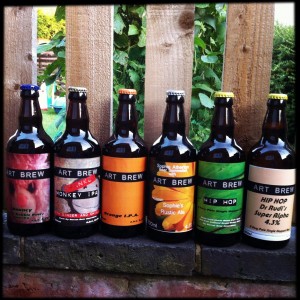 I mentioned in my review of one of your beers that I got the distinct feeling there was something a bit left field going on in the way you thought, so why the name Art Brew?
Art Brew is also a slight play on words. There is a genre in Art called Art Brut which means outsider art, made by untrained artists, often whose ways of thinking are very different from the ‘norm’.
We liked the idea of making outsider beer with few limitations or traditions and also wanted to just get on with it despite not actually having previously done brewing. So John spent a year training with Somerset brewer, Stewart Matthews of the sadly now defunct Matthews Brewery then we got down to business.
We started from (quite literally) nothing so we needed some financial backing.
We managed to secure some from the banks (in 2008, which is pretty surprising!) and then we were very fortunate that our families believed in us and helped us raise the rest.
Still can’t quite believe our luck. 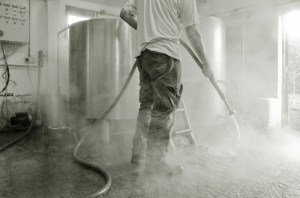 Very lucky indeed. So what are you working with nowadays?
We brew on a fantastic 5 barrel kit (though the mash tun and copper may be capable of 7) designed by Vincent Johnson, who has worked on breweries such as Porterhouse and the Firkin pub co. It is in a picturesque barn (ex piggery) in the Marshwood Vale in Dorset. We sometimes have to chase sheep, pigs and ducks away from our door. Becky now shares the brewing and designing of beers with John.

And you’re based in Dorset, but your beers are slowly getting all over the place aren’t they?
We had hoped originally to mostly sell locally but this has proved challenging. Devon and Dorset pubs, even though we’ve been going for 4 years and won several awards (including Gold in its category for Monkey IPA at this year’s SIBA South West competition), still mostly prefer to buy bigger brands. However, we’ve got a growing reputation throughout the country in places such as London, Birmingham, Cambridge and Reading, and just recently, the far north. We started bottling just over a year ago, and these, conversely, are doing well locally, including River Cottage, Axminster, where our beers are one of the few on the menu in the Restaurant. We also supply bottles throughout the country whilst delivering elsewhere. 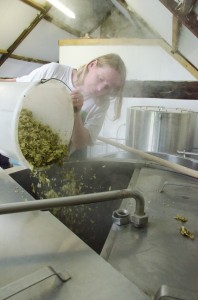 Your labels and pump clips are rather striking.
We design our own pump clips and bottle labels. Recently we’ve started an artists’ series of pump clips for our Hip Hop range of single hopped beers. On these we invite artists to design or put forward a piece of their work to go on the pump clip. Most of our designs over the years have been based around pieces made by our kids.

Finally, where to next? Any plans?
Our plans for the future? To carry on making challenging, experimental and exciting beers in cask and bottle, and eventually also a bit of keg. We would like to expand to something like a 15 barrel eventually.

And so on to the beers.
This is what I thought of a handful of them. 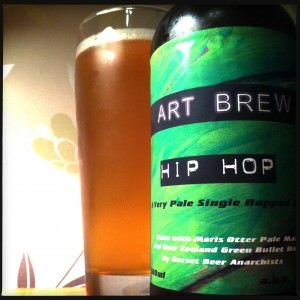 Hip Hop Green Bullet (4.3%)
Described as, “A Very Pale Single Hopped Beer,” this is brewed with Maris Otter Pale Malt and New Zealand Green Bullet hops and boy oh boy is it sharp.
Hip Hop is a light straw colour with a nice fluffy hairdo for a head.
Its aroma is intensely fresh and fruity, in fact it smells as though it should be good for you, like something freshly squeezed.
There’s a light wash of runny caramel and a dab of honey that tries its best to glue together the few fragments of biscuit at the base but it’s all in vein when pitted against hops that are this BIG.
The Green Bullet here is super bitter, super astringent and, if like me you like hops, just plain super.
Massive hits of mown lawn greenness coupled with lychee and lime juice, lemongrass bark and bay leaf crunch.
I’m amazed at just how much flavour has been wrung out of these poor hops given the comfortably low ABV.
What a brilliant bottle of beer. 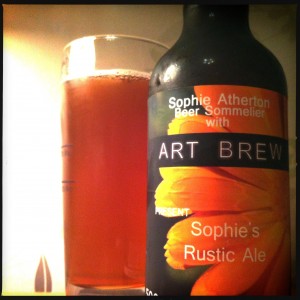 Sophie’s Rustic Ale (4.7%)
Now this is a weird one.
Good, but weird.
Brewed in collaboration with Sophie Atherton, this is a farmhouse ale brewed with English malt and hops, Saison yeast and infused with marigolds.
Yes, marigolds.
No, not the rubber gloves.
The flowers.
The beer is a rather nice amber but keeps no head at all and is only just fizzy enough for my liking.
However the smell is lovely, all Belgian yeast, light summer hedgerows and juicy pears.
Sophie’s malts are full of praline and toffee, a little nutty, and flecked with cruches spices.
The hops, as I’ve come to expect from Art Brew, are good and sharp.
Here they’re very English with lots of spiky nett;le stings and country lane greenery, grass verges and cow parsley.
In amongst them are marigolds, little splashes of sunny brightness that give a floral tint to the lovely dry finish.
As I said, weird but good. 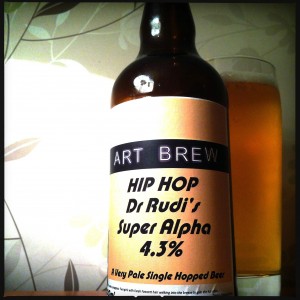 Hip Hop Dr. Rudi’s Super Alpha (4.3%)
Another single hop beer and this time it’s Super Alpha.
This light golden ale has a honey and chopped nut aroma and just a hint of sweet corn.
Dr. Rudi’s malts are rice cakes and shredded wheat, caramel and a very soft barbecued corn on the cob.
The hops here are fresh and zingy green herbs tied together and used to whip you into submission.
Lime zest and kiwi fruit juice combine to make your eyes water as crushed lemon pips provide a woody, pithy dryness that leaves an almost unending finish. 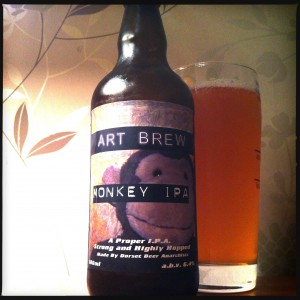 Monkey IPA (6.4%)
Monkey is Art Brew’s “Proper” IPA.
Strong and highly hopped and rather good, it’s an orange marmalade of a beer with only a hint of a head.
The smell is super juicy and fresh, sweet with pear juice and full of Fizzbomb fun.
Maris Otter is the malt here and it’s round and fat and chewy, with toffee gloopiness and a load of shortbread.
But it’s the hops that are the stars again here.
They’re enormous blasts of sherbet and apple juice wrapped in nettle leaves.
Spicy pepper sparks on your tongue and boozy kids’ sweets give an E number kick.
The finish is the hands of a mean wrestler wearing flowery gloves wringing out your tongue.
Puckering to say the least. 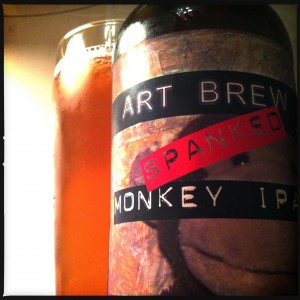 Spanked Monkey IPA (6.4%)
So, what happens if you add fresh ginger and chilli to an already terrific IPA?
You get your monkey spanked.
This is not for the feint hearted, pouring a lovely orange with a fresh smell of fruit and coriander and the great outdoors with cloves up your nose, the aroma is rather inviting.
And then you take a mouthful.
Initially it’s all caramel and toffee biscuit malts, but just as you’re about to say, “This is a rather nice IPA,” you get a pinch of ginger that makes you look back at your glass in a, “Ooh! That’s a nice surprise,” kind of way.
And then just as you reach for another sip the chilli jumps out and shouts, “Boo!”
It’s fresh and red and hot ad really rather sexy.
If you like freshly chopped chillies then this is the beer for you.
The heat is mouth filling without being overpowering.
It’s hot and spicy and prickles away at your sensibilities but leaves enough room for the citrus clean swipe of the hoppy finish to wipe your palate ready for round two.
Dead good. 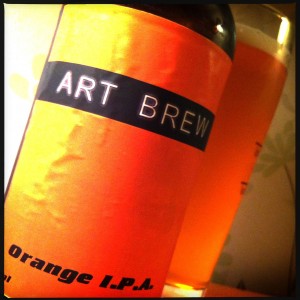 Orange IPA (6.5%)
Without letting this sound like some weird love letter, this is one of the best tasting beers I’ve had for a very long time indeed.
Brewed with New World hops and orange peel, I’ve not tasted anything quite so fresh and vibrant as this.
The beer fittingly pours the colour of home made orange marmalade and smells super fresh and full of orange zest.
Try scratching your fingernails across an orange and then putting them up your nose.
That’s the smell.
And as for the way this beer tastes, it’s edgy and zingy and very very big.
The base is a sticky caramel malt with biscuits and a little spice, rather like a Jaffa Cake with black pepper sprinkled over it.
The hops are fiery citrus explosions with fresh green herbs, camomile tea and some mango richness.
But over it all wanders the orange peel zest, satsuma pith and mandarin flesh that leaves a majorly bitter finish that literally screams, “ORANGES!” as it leaves you grabbing for your next mouthful.

Many thanks to Becky and John for their time, their openness, and for their brilliantly creative beer.
*NB: John keeps beating me at Scrabble these days but I have no weird or romantic plans to turn the tables.

One Response to Art Brew: Beer Anarchists In The South West