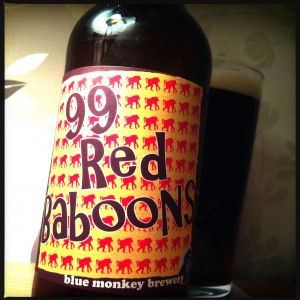 Another vaguely disappointing beer from this year’s Great British Beer Hunt.
The label asks, “Is it sort of a Porter or maybe a Mild? You decide.”
OK then, I’ll decide.
This is a mildly decent Porter.
I’ve enjoyed the beer I’ve tried from this brewery up until now, but this just lacks interest.
It’s a dark beer that smells of one of two things.
It’s either my son’s rubber swimming cap ot the bicycle inner tubes of my childhood.
There’s a tiny bit of chocolate melted over a digestive biscuit in the malt, and there’s some reasonable dryness in the finish brought on by a leafy hop witha  splash of indeterminate fruit juice around the edges.
Entirely underwhelming and every so slightly rubbery.