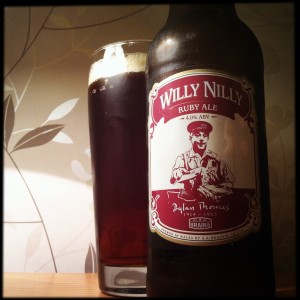 This Ruby Ale is the best beer I’ve had from Brains.
So what does that tell you?
Well, it’s a pretty decent toffee heavy session ale that sits in your glass a very inviting berry red with a wisp of cream coloured head, while the aroms is spiced oranges and treacle, all rather wintery and dare I say a little bit Christmassy.
As you take a mouthful the first thing to hit you is a really big chewy berry filled toffee, there’s a lot of black cherry in here and a touch of mixed woodland berry juice.
The hops are crunchy, autumnal and rather brown.
And there’s a nice earthiness too, but sadly the finish goes a bit flat as there’s not quite enough zing to leave you thinking, “I must have more.”
That said, this is one of the better beers form this year’s Sainsbury’s Great British Beer Hunt.