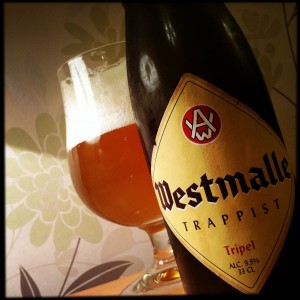 I was so sure I’d reviewed this before but I can’t find it anywhere on the CAMRGB site and so here I go.
I got this in this month’s Beer Hawk mixed case and I was very pleased to see it as I’d not had it for ages.
Tripel pours a rather disconcertingly light gold with the most enormous fluffy head.
The smell is rich with orchard fruits, yeast and honey and there’s a big honey presence in the flavour too.
Rich and runny, full of burned sugar and crispy toffee apple, the malts are straw and golden biscotti, crunchy and sweet.
The hops bring a citrusy brightness with a lot of lemon zest and the biggest bitter sweet dryness you could hope for.
I could delve deeper into the flavours at work in this little bottle of beer and tell you about how complex they are and how, if you take your time and savour each mouthful you’ll find something new and interesting as you work your way down the glass.
But loads of people have said all that stuff before and so I’ll sum Westmalle’s Tripel up in the way my kids sum up food they like, “Yum scrum piggy’s bum.”