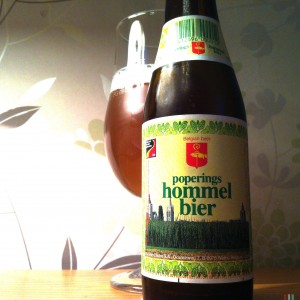 Not long after my friend got back from Belgium with a few bottles for me a parcel arrived from another friend who had done the same thing.
This one’s from him and it’s a delightful little 250ml of beer beauty.
Soft and fruity and very much a Saison in character, Hommelbier pours a cloudy honey and smells of apples and walnuts, cloves and pepper.
There’s a big round chewy toffee in here and it’s surrounded by apples and pears, raisins and nuts, a hint of lavender and lots of honey and cardamom.
Brewed using Brewer’s Gold and Challenger hops that are sourced locally to the brewery Hommelbier is super fresh and pithy, with a little celery and a lot of floral greenery punctuated by lemongrass sharpness before a long dry lip smacking finish.