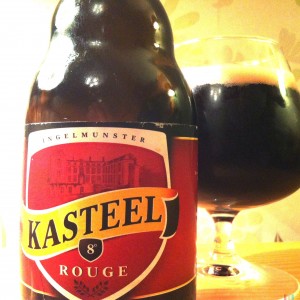 Perhaps I should have known this was a Kriek, but the label simply says Rouge so I expected a red ale.
I’ve only ever had fruit beer once before and didn’t like it.
This doesn’t change my mind at all.
Sure, the colour it pours is a lovely red with a pink head, but I don’t like the glacé cherry steeped in sugar smell, and I don’t like the cherry sweet blast and burning bitter backbone.
And I especially don’t like the added sweetener that leaves an aspartame glove over your tongue.
No, I just don’t like it.