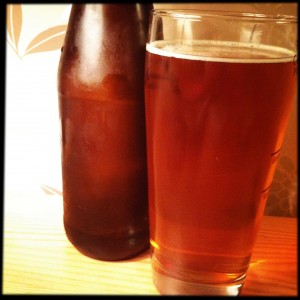 This review will almost certainly come across as rather biased but the truth is that even though Alan, whose home brewed (“Nano Brewed!” as he likes to exclaim) beer this is, is a friend, fellow band member and There-Is-No-God Father to my youngest daughter, he makes pretty decent beer.
It has some rough edges here and there, but it’s really rather good.
This one has a sweet caramel backbone that’s sprinkled with crushed peppercorns, hints of honey and bacon in the aroma, and pours a very warm amber with just a lick of bubbly head.
Brewed with Cascade, Challenger and Styrian Goldings, the hops are satsuma peel pithy, slightly minty and good and dry.
Right at the end you get an added burst of lemon zest and runny honey.
Sharp, bitter and sweet, Alan’s beer is a little like his music and I like it very much.